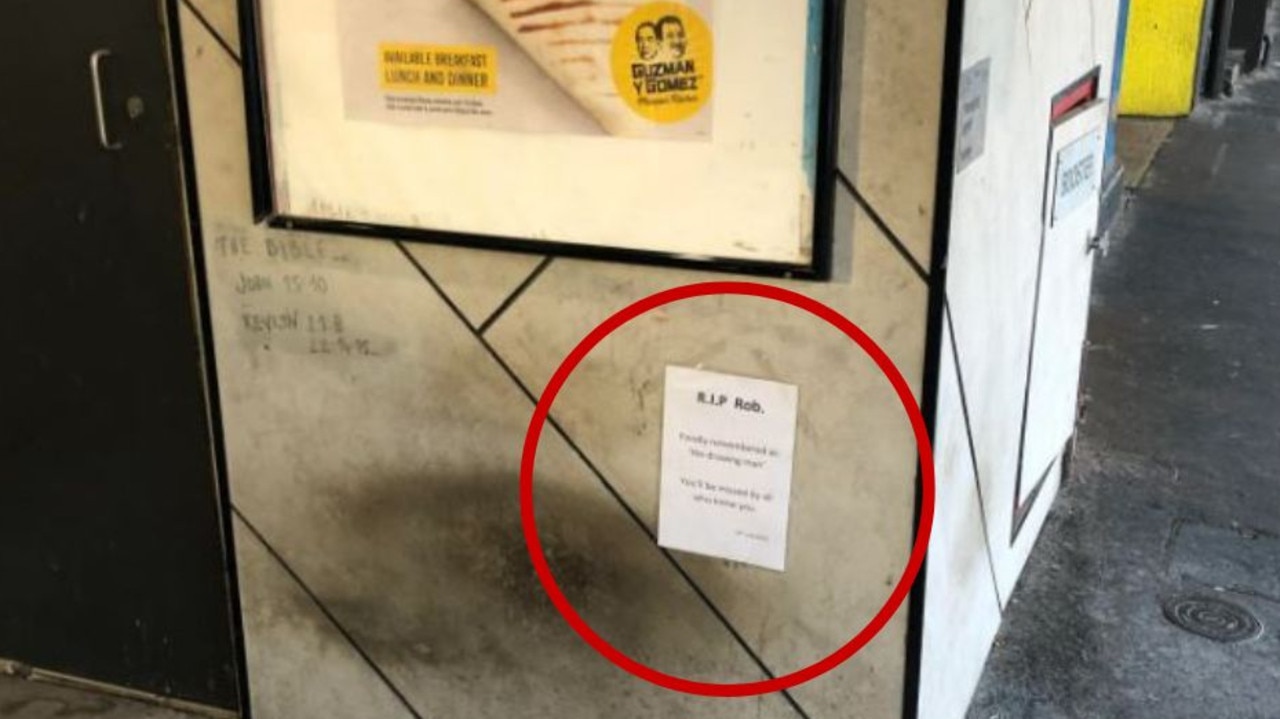 The scene, which looks like something straight out of Alice in Wonderland, is the last ever drawing of a person who for years was simply known as “The Drawing Man”.

Above his art, pasted on a wall separating Guzman y Gomez and Metro Woolies, hangs an A4 print commemorating his death.

“RIP Rob. Fondly remembered as ‘the artist’, you will be missed by everyone you knew,” the paper reads.

It is difficult to keep up with those who are victims of homelessness, with an estimated hundreds of deaths each year.

The problem has been called Australia’s ‘invisible problem’.

But Rob was far from invisible. Despite his temporary living conditions, he became a much-loved member of the Hawthorn community, charming locals with his abstract art and “gentle soul.”

“I moved to the area about five years ago and saw him damn close every time I went grocery shopping or lunch,” one resident recalled on Reddit.

“He was a fixture on that road, even as shops and people and even time changed.

‘I remember seeing his drawings for the first time, the simple houses or suns or vehicles he drew. Over time, that turned into complex, colorful, abstract art.

“He was a dedicated man, took the time he was given and committed to creating something beautiful.”

For over a decade, Rob frequented the areas beyond the Hawthorn Woolworths or Malvern Coles, waving and smiling back at people rushing to catch a tram or pop into a shop for a snack.

Reddit users said that while he “never asked for anything,” locals made sure Rob was always looked after by offering to share meals or sit and draw with him.

But when Covid forced Victoria into lockdown, community concern began to wane.

“I bought him some art supplies at the start of Covid,” said user @mhrauburn, the original poster.

“Pre-Covid I saw people getting things for him from Woolies, but not so much lately. I really hope he passed away peacefully.”

For the man who “became part of Swinburne”, many commentators also expressed grief because they knew they would never be able to talk to him about his drawings again.

‘Slide through the cracks’

Rob was not always ‘the draftsman’.

A former graduate of Swinburne University recalled a chance encounter ten years ago where Rob claimed that he had once been an aspiring artist employed by the popular Heide Museum of Modern Art.

“Someone once gave me $20 and said to me, ‘If you don’t need it, give it to someone who does,'” wrote Reddit user @Random_Sime.

“I was studying at Swinburne and I saw Rob every day so I gave it to him and had a chat about 10 years ago.

“I asked him where he learned to draw and he told me he was an artist working with Heidi. lived and worked (sic)but never ‘made it’ as an artist or was excluded because of interpersonal politics.

“All he wanted to do was make art and make people appreciate it. He preferred to make reproductions of well-known works on the footpath rather than his own stuff because it received more attention from passers-by.

“Then I graduated and haven’t been in that area much after that. RIP Rob.”

That user’s memory is the extent of what is known about Rob’s life story.

Rob’s was one of nearly 28,000 Australians left homeless.

While Reddit user @Random_Sime appreciated that so many others had come to know and love Rob’s story through his post, he reminded the community that there were many people like Rob living all over Australia.

“Everyone has a story and they usually love to tell it if you show genuine interest and ask questions that arise from what they tell you,” they said.

Rob’s last work of art has been washed off the sidewalk under high pressure.

The only remaining markers of his life appear to be the paper printout, a lone Reddit thread, and perhaps scraps of drawings collected by passing strangers.

“A kind soul left some flowers at Rob’s place,” the original Reddit poster said in an update.

“It is touching to know that so many people have such fond memories of Rob. I really hope he is at ease knowing that his work and life were appreciated by so many.”