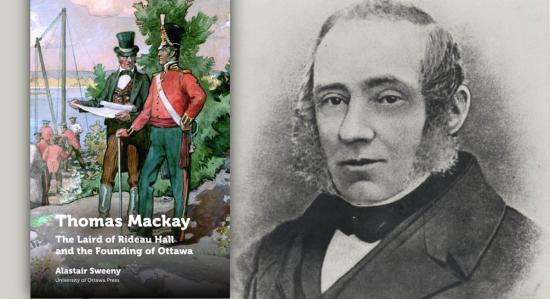 In 1792, Upper Canada Lieutenant Governor John Graves Simcoe invited American Loyalists north to accelerate colonization. Thomas Mackay: The Laird of Rideau Hall and the Founding of Ottawa is a must-read history of the colonies of Upper and Lower Canada that tells the stories of these and other settlers who saw a glimmer of opportunity in this new land and went above and beyond to make their vision a reality.

After the British victories in the American War of 1812 (and their subsequent defeat of Napoleon at Waterloo in 1815), the British government wanted to ensure the security of the colonies against the Americans, who were known as allies of the French. They also instructed the British Royal Navy to seek alternative sources of timber and hemp for their fleet. These two factors led to the construction of infrastructure, namely canals, to facilitate the transportation of goods from the interior to Quebec and on ships to England. It also opened safe supply roots to Lower Canada, namely Kingston.

By the time Thomas Mackay arrived in Montreal with his wife and family in 1817, Boston-born and Imperial loyalist Philemon Wright and his sons had moved wood from Wrightstown (now Gatineau, Quebec) along the Ottawa River through the treacherous Lachine Rapids. , all the way to Quebec City for over a decade.

Mackay had cut his teeth as a stonemason alongside his father in Scotland and soon found work as a stonemason in Montreal. His work on Fort Lennox for Lord Wellington led to him being asked to bid for the Lachine Canal and then the Rideau Canal.

Thomas Mackay: The Laird of Rideau Hall and the Founding of Ottawa is much more than the life of Thomas Mackay and his vision of Bytown as a capital. Known to Ottawans by the names of streets in the capital – Richmond, Scott, By, Bell, Byron, Elgin, Dalhousie, Wellington and many more – Alastair Sweeny tells the stories of the men behind the names and their contribution to Bytown.

And then there’s the incredible story of the “loot” of Spanish silver. Captured by the British Navy during wars against France and Spain, the precious metal was kept in the citadels in Halifax, Quebec, and in an ammunition depot on Saint-Helen’s Island in Montreal.

Sweeny’s investigation revealed that the false charges made by the British Parliament against Lieutenant Colonel John By, famous for overseeing the construction of the Rideau Canal, for cost overruns in the Rideau Canal construction were nothing more than a political sets. It turns out that the stock of silver bars covered the channel expenses. It is a great shame that Colonel By was never commended for his incredible achievement in his time.

Thomas Mackay worked directly with Colonel By. Both men had a reputation for being perfectionists while also treating their employees with respect.

Mackay’s accomplishments are extensive: builder, legislator, militia leader, founder of Queens, founder of New Edinburgh, and the list goes on. Unfortunately, the name Mackay was not passed on in Ottawa. Although he fathered sixteen children, Mackay and his wife lost all but three of their daughters to illness and drowning.

Thomas Mackay, however, lives on in the craftsmanship of the structures he built nearly 200 years ago: the incredible curved locks at the entrance to the Rideau Canal; Ottawa’s oldest stone building, the Bytown Museum (1826), originally built as a supply depot; Rideau Hall, the home of the Mackay family and an architectural marvel of its time; Earnscliffe, once home to John A Macdonald.

Thomas Mackay: The Laird of Rideau Hall and the Founding of Ottawa is very pleasant to read. Sweeney brings the characters to life and captivates the reader with his passion for the history of Thomas Mackay and Canada’s capital.

Thomas Mackay: The Laird of Rideau Hall and the Founding of Ottawa is for sale at the University of Ottawa Press and your favorite independent bookstore in Ottawa.