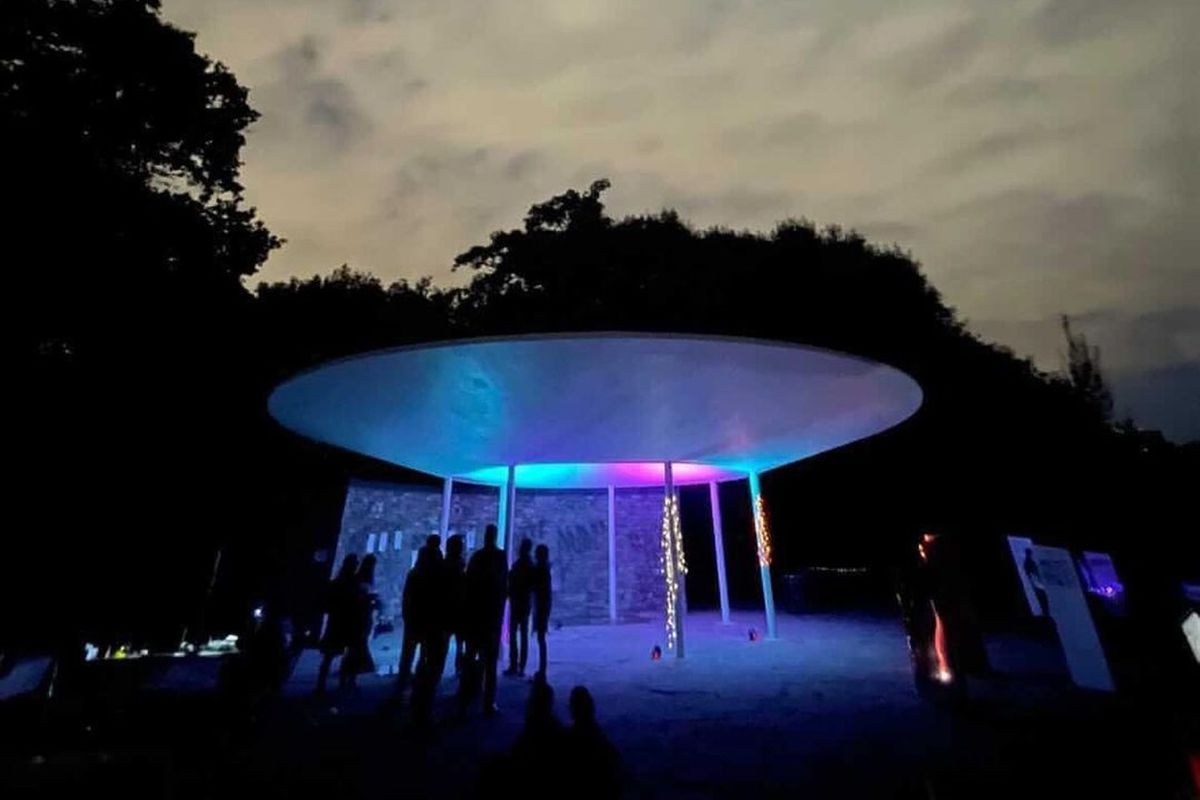 When I last visited the alien rune stone 11 years ago, Toronto residents were no longer interested in contacting the Venusians. However, the elderly — those who lived near South Humber Park at least — knew that on nights when Venus would appear framed in the structure’s oculus, certain vocal frequencies, as amplified by the disc, would reach the planet, and the dialogue that started in 1959 could be continued because there was still so much information to share between our two planets. But those vintage cars, saddened by the graffiti and general decay of the Venusian drive, stopped coming…so much so that in 2016 the tiny alien pavilion was threatened with demolition.

Okay, so only a very small part of the above paragraph is true. But fantastic constructs like this often inspire sci-fi nerds like myself to fantasize.

In reality, ‘the Oculus’, as it has come to be known, is a composition of three parts: a curved and flagged toilet block; a concrete canopy disk with an ‘eye’ in the middle; and a trapezoidal patio made of flagstone. Designed by architect Alan Crossley and engineer Laurence Cazaly in 1958 and built in 1959, the Oculus stood in a clearing as part of a newly landscaped park (formerly a golf course) and sewage treatment plant built in response to the devastation of Hurricane Hazel in 1954 , which washed away homes in the area and claimed 81 lives.

In those heady days of Sputnik, Alan Shepard and the Space Race, people could park at the sewage treatment plant and easily find their way down to the Crossley-Cazaly flying saucer and dream of Venusians (or Martians) under the cool shade it provided. However, as the treatment plant expanded decades later and it was not so easy to spot the high-flying structure, it fell into disuse and eventually fell into disrepair. As the trees and undergrowth grew closer, only those who hiked the Humber River Recreational Trail (built in 1980) could marvel at its otherworldliness, but few had reason to approach once the washroom was boarded up.

By 2016 and as part of a revitalization plan for the park, the city announced that it would completely remove the curved toilet block, replace the flagstone plaza with concrete, and leave just the disc (but with modified steel columns).

Fortunately, this angered the Architectural Conservancy of Ontario (ACO), ACO President Stephanie Mah says: “The public reached out to us on Twitter and said ‘this is going to be demolished’ … so we got in, we did. an online petition, we’ll put it on our At Risk Register [and] we reached out to the city and the city happily listened.”

In 2019, the ball really started rolling when two things happened: an astonishingly detailed report for the city’s Heritage Preservation Services Department was completed by Brown + Storey Architects, and Ms. Mah, who was unaware of the Brown + Storey report, decided to apply for a $36,000 grant from Park People’s “Public Space Incubator” program. By receiving the grant, the ACO was able to hire Giaimo, an architectural firm specializing in heritage restoration, who immediately conducted an assessment of the building’s condition.

More funding followed from Friends of the Pan Am Path, HNR Properties and Creative Silhouettes, and the team was cleared to carry out an “exterior restoration” by the City of Toronto. “So we couldn’t touch services like water or electricity,” says Ms. Mah, “but we were allowed to restore the exterior and for us that was a great first step.”

Before that first step was taken — and as the COVID-19 pandemic had struck — the ACO and Giaimo began to enliven the space with “a series of engaging and educational programs that gave the community ongoing opportunities to visit the site,” according to the statement. to a 2021 ACO publication titled The Oculus Revitalization. Giaimo, who also teaches at Toronto Metropolitan University, had his students come up with fantastic uses for the structure, such as a “staircase to the top and then it becomes a viewing platform,” which, Ms. Mah laughs, “sounds like an obligation.”

Then, in October 2020, while the restoration was still delayed, the team dressed the disc in large yellow stripes for a temporary installation dubbed “Brighter Days Ahead”.

The restoration finally took place in June and July 2021.

In the year since the small complex presented its much cleaner face to the city, the response has been “incredible”, says Mr Giaimo: “This is testament to the popularity and importance of this pavilion and the public space in general; the its re-incorporation into park programming is a great example of harnessing existing architecture as a socially and environmentally sustainable approach to urban building.

The night I visited with Ms. Mah, Kevin Murphy and Daniella Kandasamy were putting up decorations between the columns in anticipation of “Oculus Open Mic Thursdays” where mainly acoustic musicians perform (as there are no electrical outlets) who, ironically, don’t. live in the area.

“I don’t actually know if anyone who is a regular attendant lives in the area,” said Ms. Kandasamy.

“A lot of people come from downtown,” agrees Mr. Murphy.

So what attracts musicians to this space age relic over a dozen miles from Queen West or Dundas West, I wonder? Well, as mr. Murphy explains, when the event started in 2020, there were “no indoor music performances,” but a small part of me thinks it could be something else as well. While Toronto has some amazing architecture from the 1950s and 1960s, very little of the super expressive, Californian “Googie” stuff originated here. Other than Uno Prii’s Flower Power apartments and the odd flying saucer-shaped burger joint, we have very few, so what we do have is precious indeed… and even non-enthusiasts can feel that.

Or maybe, just maybe, the Venusians really have us under their spell.

To access the Brown + Storey report, go to brownandstorey.com and type ‘Oculus’ in the search box. The ACO publication The Oculus Revitalization is not currently available to the public, but it is hoped that a PDF version will be available online soon.

Your home is your most valuable asset. We have a weekly Real Estate Newsletter to help you stay on top of housing news, mortgages, the latest closings and more. Register today.