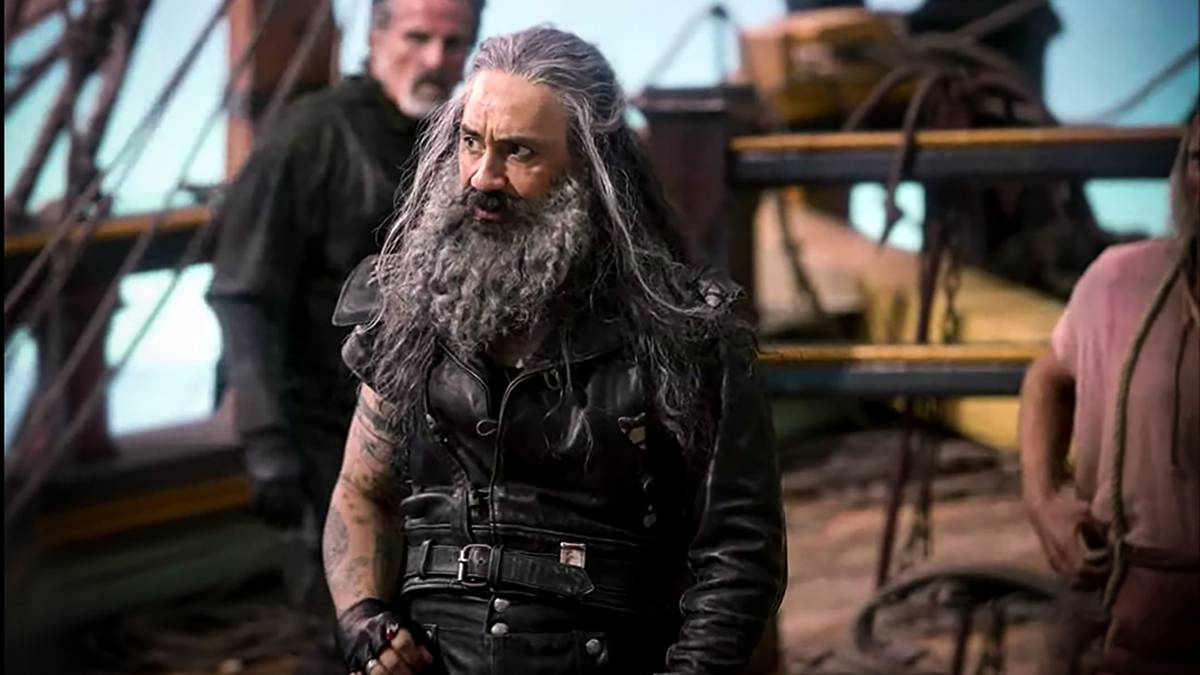 Previously published on The Spinoff

*Contains spoilers for season one of Our Flag Means Death*

It’s described as a comedy about a real-life aristocrat turned “gentleman pirate”, and stars Rhys Darby and Taika Waititi, so you might understand my surprise when Our Flag Means Death turned out to be a full-blown romance.

Now, it’s blowing up the internet.

While the first handful of episodes are a quirky workplace comedy set aboard an 18th century pirate ship, the HBO Max show – screening on Prime and available on Neon in New Zealand – has pivoted in its second half – and in doing so has won a legion of new fans and become an online sensation.

Darby plays Stede Bonnet, a largely unknown but actually real person who turned to a life of piracy after deciding he’d had enough of his cushy home with a wife and kids. He gathers a ragtag crew who generally hate their incompetent pirate boss but, surprise surprise, grow to become a family as the series progresses.

For a while, it’s exactly what you’d expect a show that features Darby playing a pirate to be. And then suddenly, it’s not – when Waititi shows up four episodes in as Blackbeard.

His reputation precedes him, of course, because he’s Blackbeard. But while he’s introduced to the show as a fierce and notorious figure, it soon becomes clear that Darby’s Stede and Waititi’s Blackbeard aren’t destined to be mortal enemies. Instead, they quickly become friends – and then things turn once again. The last few episodes become a will-they-won’t-they rom-com with Stede and Blackbeard as the romantic leads. In the final episode, the pair even kiss.

It’s a surprising shift in the show, and one that wasn’t advertised early on, leading to plaudits from fans who were worried it would end up as just another example of “queer baiting” – an unfortunate trope where a show hints at, but then does not actually depict, same-sex romance or LGBTQ+ representation. Think Rachel and Quinn on Glee, or Finn and Poe in Star Wars, or Holmes and Watson on Sherlock. Or practically any of the same-sex characters on the trash heap that is Riverdale.

In a post on Instagram, Waititi explained that this show was explicitly meant to be more than just the “bromance” it initially appeared to be. “It’s ROMANTIC,” he wrote on Instagram. “If you hate this show, don’t worry, I still love you. And I hope you begin to understand the many layers that love can encompass. Love is love baby.”

In an interview with Entertainment Weekly, Waititi jokingly said the creative decision was simply to piss off “homophobic historians”. But, he elaborated: “It all stems from this mutual interest and fascination with one another. Blackbeard’s seen it all, and he sees this guy who’s given up everything to be a pirate, when he knows nothing about the ocean life.”

The show’s creator David Jenkins said Darby and Waititi, who have known each other and worked together for over a decade, were always onboard with the show’s premise and the “opposites attract energy” that is present throughout. “I first started reading about Stede and how he befriended Blackbeard and we don’t know why. Very quickly, it was like, ‘Oh, it’s a romance’,” Jenkins said.

And it’s not just the relationship between Stede and Blackbeard that sets Our Flag Means Death apart from many a show before it. The comedy features a prominent non-binary character, examples of other gay couples, and exists in a far more diverse universe than the real Stede would have likely inhabited. It also avoids any conversations or even explicit acknowledgements that these relations are “abnormal” in the show’s setting. Jenkins told Decider he wanted to “side-step” the coming-out subplot. “I just want a romance. I want a Titanic romance between these two people. We don’t have to do the coming-out story and then the non-binary story… We don’t have to do the ‘I am whatever’ pronouns, however they would do that. I thought it was just really good to skip it because we’ve seen it.”

i caved i caved the funny pirate show has me in its iron grip #OurFlagMeansDeath pic.twitter.com/WCKplpQW60

Instead, Waititi described Our Flag Means Death as a love letter “about minorities to minorities” and hoped it would speak to those who feel, or have felt, like they’re outcasts.

The response online has been immediate and immense. Our Flag Means Death has been trending on Twitter, well, before the Oscars imploded anyway, with the requisite mix of fan art, unrestrained praise and calls for a second season. “Our Flag Means Death has a grip on me and these two mean the world to me”, one person tweeted, along with a drawing of the Stede and Blackbeard smooch. “The representation in this show means so much to me as someone who is trans and queer,” said another. “Seeing myself represented without being a joke or having to ‘come out’, thank you for this amazing show.”

While HBO is yet to officially order another season, Jenkins told Polygon things were looking good. All going to plan, a second sail on the seven seas won’t be too far away.

Our Flag Means Death is available to stream on Neon