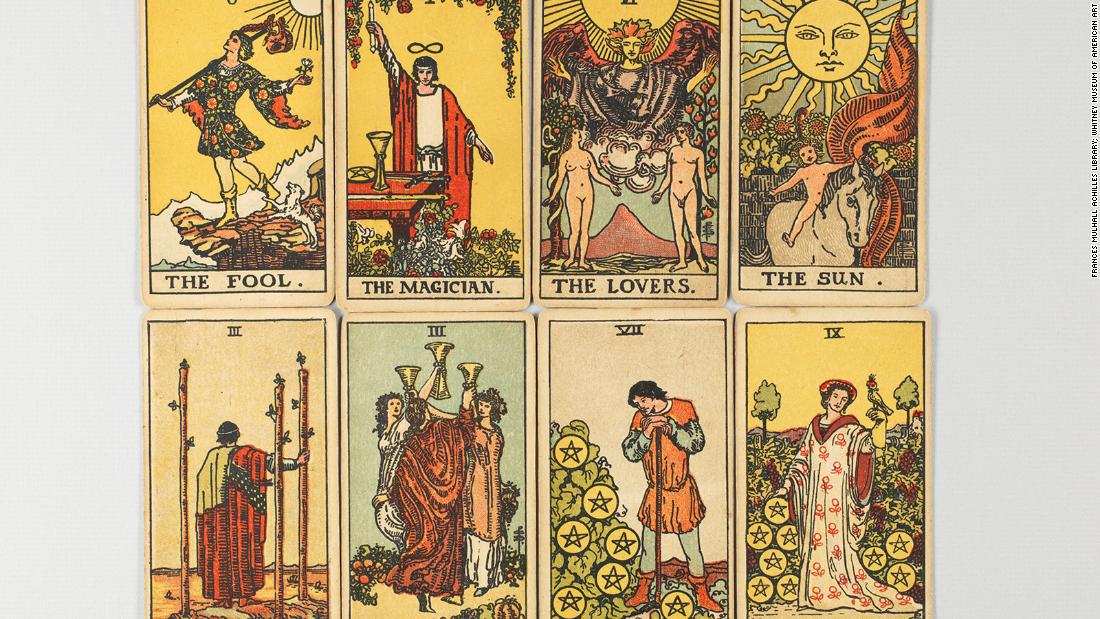 Keep a question in your head, shuffle, select your cards and look into your future. For centuries, people of all walks of life have turned to tarot to foretell what lies ahead and attain a higher level of self-understanding.

The cards’ enigmatic symbols have become culturally ingrained in music, art, and film, but the woman who inked and painted the illustrations of the most widely used set of cards today—the 1909 Rider-Waite deck— originally published by Rider & Co. — fell into obscurity, overshadowed by the man who commissioned her, Arthur Edward Waite.

Now, more than 70 years after her death, creator Pamela Colman Smith has been included in a new exhibition at New York’s Whitney Museum of American Art that highlights many underrated artists of early 20th-century American modernism, alongside famous names like Georgia O’Keeffe and Louise Nevelson.

Eight cards from a vintage set of the Rider-Waite-Smith deck, printed between 1920 and 1930. Credit: Frances Mulhall Achilles Library; Whitney Museum of American Art

Smith, like many female artists of the time, was a victim of “the marginalization of female performance,” according to Barbara Haskell, the show’s curator.

An entire vintage set of Smith’s tarot cards is on display at the Whitney show, along with one of her dreamy 1903 watercolor and ink works entitled “The Wave,” which is now part of the museum’s permanent collection.

Smith was a fascinating yet mysterious figure – a mystic who was part of the secret occultist society the Hermetic Order of the Golden Dawn, which borrowed ideas from Kabbalah and Freemasonry for his own spiritual belief system based on magic and metaphysics. Born of American parents in London, Smith spent a period of her childhood in Jamaica and styled herself in West Indian fashion, leading to conflicting reports as to whether or not she was biracial. She’s also been cast as a cult queer icon for sharing a home with a female companion and business partner named Nora Lake for years, though Haskell says it’s “unclear” whether their relationship was romantic.

Pamela Colman Smith illustrated the most famous tarot deck, but her contributions were overshadowed by AE Waite, who commissioned her. Credit: Public domain

In Smith’s work, “she was drawn to a kind of mystical vision of the world,” Haskell said in a telephone interview. She listened to music to unlock her subconscious and reportedly had synesthesia – a neurological disorder that causes the person to see shapes or colors when they hear sounds. Smith worked in the Symbolist tradition — which prioritized metaphoric and emotional imagery over the mundane — at a time when the US was undergoing massive industrial and social change just after the turn of the 20th century.

“Her visual art represents this moment when people find solace in more spiritual concerns, especially at a time when industry is taking over and creating a sense of fragmentation and isolation,” explains Haskell.

When Waite approached Smith to illustrate his vision for a redesigned tarot deck, she was 31 years old and had her paintings exhibited in the New York gallery of famed photographer Alfred Stieglitz, who was a major proponent of her work. Waite, like Smith, was a member of the Hermetic Order, but had risen to the rank of Grand Master. He had extensively studied old texts and written new ones on the subject of mysticism, and had ideas about the concept of the new cards and how to arrange them.

“The Star”, from the Major Arcana. Some of Smith’s original tarot artworks were in the collection of the Alfred Stieglitz/Georgia O’Keeffe Archive, now part of the Yale Library. Credit: Courtesy of Yale University Library

Tarot has been around in Italy since the early 15th century, evolving from traditional playing cards. The 78 cards are divided into two groups, the Major and Minor Arcana. The Major Arcana contains allegorical characters such as the moon, the sun, the fool, and the lovers, while the Minor Arcana is divided into numbered and face cards in four suits: wands, swords, cups, and pentacles. While previous decks were less pictorial in nature, Smith’s is filled with luscious imagery that makes their interpretation easier for the reader.

“He was the one who turned the deck on, there’s no doubt about that,” Haskell said. “And he probably had quite a bit of input into the Major Arcana.”

While Waite may have directed the concepts for those 22 cards, the footage was all by Smith. And since Waite was less interested in the Minor Arcana, which consists of 56 cards and often featured more simplistic graphics like playing cards, Haskell said those ideas were “all hers.” Smith completed the 78 images from her Chelsea studio in London using ink and watercolor.

The two of swords. Smith conceptualized the 56 cards of the Minor Arcana all by himself. Credit: Courtesy of Yale University Library

Smith’s influences for the images included English artist Aubrey Beardsley’s indulgent ink illustrations, the luminescent paintings of the Pre-Raphaelites, the saturated color blocking of traditional Japanese woodcuts and the ornamental details of Art Nouveau, according to Haskell.

For her efforts, she received a small fee, but not the copyright. Today it is claimed that more than 100 million copies of the card game have been sold, but Haskell warns that it is difficult to estimate its reach.

Just three years after the Rider-Waite deck was published, Smith stopped making art, which hadn’t been a lucrative prospect for her. She staged her last art exhibition, converted to Catholicism and bought a house in Cornwall after inheriting some money from the death of a relative. She and her partner Lake entered the house and made a living renting it out to priests. Smith also became involved in the women’s suffrage movement and the Red Cross, her priorities seem to have changed.

When the Great Depression hit in 1929, its devastating economic effects closed down galleries and American art shifted away from the decadent style of Art Nouveau to “the resilience of everyday life,” Haskell said. Those seismic shifts likely relegated Smith’s short career to the footnotes of art history.

“The artists working for the most part turned to more realistic styles or fell into obscurity,” she explains. Many of them “didn’t have sustained gallery representation.”

Despite an increase in interest in recent years, Smith is not much collected or exhibited today, but Haskell believes that her entire work is worth revisiting, and that Smith was symbolic of the period in which she belonged.

“She represented this whole turn of the century mood, which was to dig into the unconscious and tap into the intuitive experience,” she said. “Not to get so involved with concrete, rational facts, but to really explore these more emotional realms.”

†At the dawn of a new age: American modernism of the early twentieth century“on display at the Whitney Museum of American Art through January 2023”†