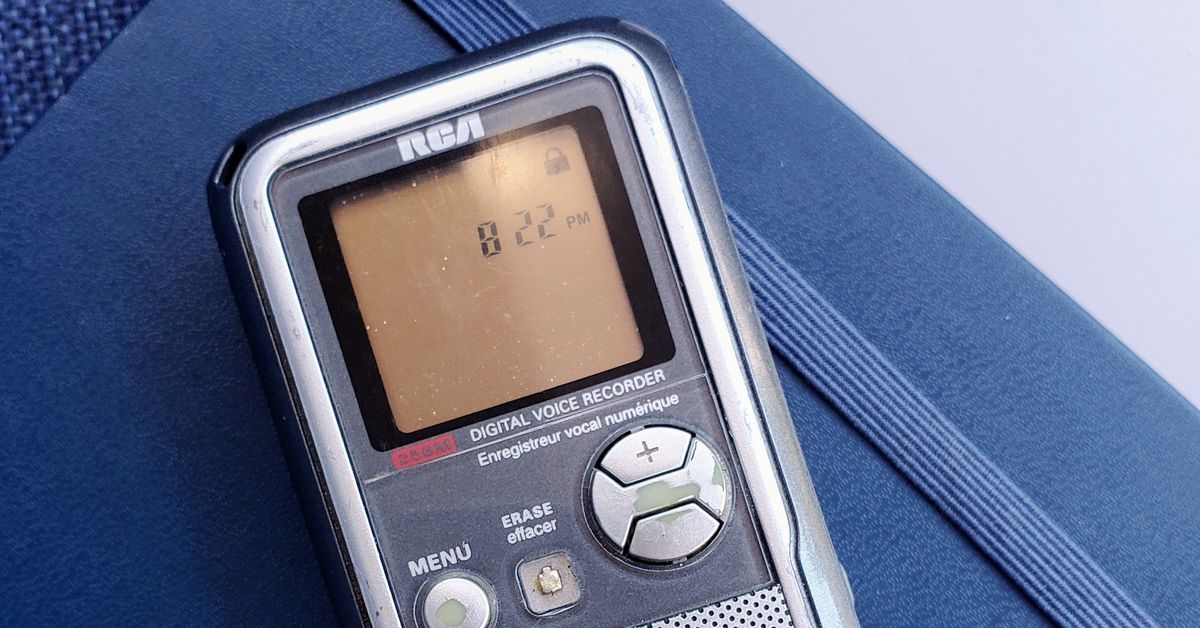 In November 2009, I was getting ready to attend the Montreal International Games Summit, and I panicked – it was my first major event as a member of the press, and I had no way of recording an interview. This was a problem because I was scheduled to talk to Yoichi Wada, the then president of Square Enix, along with a number of other industry leaders. So I rushed to Radio Shack and chose the cheapest voice recorder I could find, a small gray rectangle made by RCA that was locked in a glass display case. I have no idea which model it is, but it has followed me my entire professional career thus far – now, almost 13 years later, it is finally retiring.

I stuck with that gadget for one main reason: I trusted it. The RCA recorder had no particularly notable features; the sound quality was just OK, and it was actually quite annoying having to keep a bunch of AAA batteries on deck. But I’ve always been paranoid about losing an interview and wasting both my time and – worse – that of someone who agreed to talk to me for a story. So as long as the recorder was working, I had no real reason to replace it. And it always worked. Even when the “erase” button fell off, I stuck with it. But earlier this month, while attending Summer Game Fest, I came to a sad conclusion: The rewind button didn’t work, putting the recorder past its usability point.

But it led a good life. In fact, it’s been with me all my career The edge so far, dating back to 2012. Every personal interview I’ve done during that time period was recorded on that machine. I took it with me when I flew to New York to hear Shigeru Miyamoto’s grand plan to bring super mario to the iPhone and when I was in Montreal learning how the Ubisoft team mimicked an entire city like Paris. I had it with me when, a day after submitting my review, I struck up a fun, long conversation with the directors of The Legend of Zelda: Breath of the Wild in San Francisco.

I took it to many iterations of E3 in Los Angeles to report on the state of the Japanese game industry, explore Nintendo’s plans for the future, and understand Phil Spencer’s philosophy for the Xbox. In 2019, I had it on my hands as I tried to hold my face tight as I asked Nintendo veterans what a gooey version of Luigi would taste like. It recorded Yoko Taro as he spoke without his iconic mask on† I was lucky enough to talk to the main minds behind almost all my favorite games as a kid, whether it was super mario† metro† god of war† Devil May Cry† Monster Hunter† dragon questor Final Fantasy† Every time I traveled to an event or studio or even just had coffee with someone from the entertainment industry, I felt safe knowing I had that RCA recorder in my pocket, ready to go.

And in the days before Zoom dominated most of my professional communications, I even used it to record a lot of phone calls. It was inconvenient – I turned on the phone’s speaker and placed the recorder next to it – but again, it always worked. That’s how I managed to track down the artists behind the classic Atari box art and hear Sean Bean talk about what it’s like to be killed in a video game. In 2013, I locked myself in a bathroom to talk to David X. Cohen about the end of… futurama so I wouldn’t wake my first child from a nap.

With the proliferation of video calls and the lack of in-person events in recent years, the recorder hasn’t gotten a lot of work. It has been in a desk drawer for about 36 months. But earlier this month, I got the chance to use it again when Summer Game Fest held its first-ever in-person event in Los Angeles. And it was as reliable as ever; I used it to record interviews with the directors of The Callisto protocol and Street Fighter 6 and to capture my first hands-on experience with peridot† But without a rewind button, actually transcribing those conversations was way too time-consuming.

It’s not clear when I’ll be going back to another in-person event, so I have time to decide what to do next. It’s not easy to replace a regular companion of more than a decade. I know I won’t be using my phone to record interviews; again, I’m paranoid, and I prefer something simple and straightforward so that a dead battery or software update doesn’t ruin an interview. But I also love the idea of ​​a single-purpose device. The RCA recorder is something I fully associate with conducting an interview, an important part of my job, and it turns out it has become an object imbued with memories. If I’m lucky, I’ll find something to capture even more.