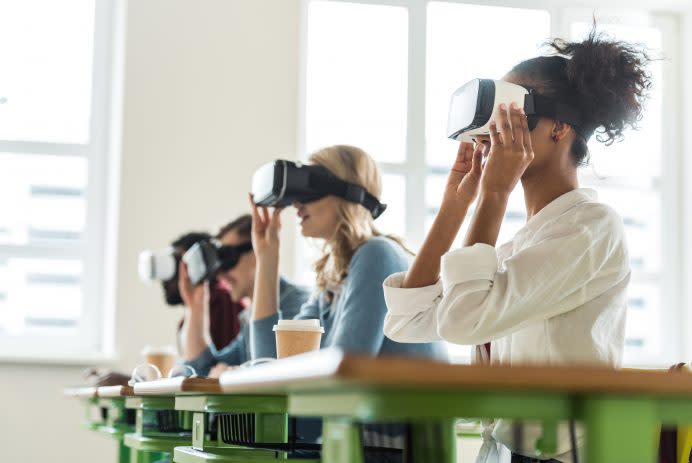 As the metaverse trend spreads online, universities are following the wave to create “metaversities.” Several U.S. colleges plan to open virtual reality (VR) replications of themselves by the fall of 2022.

Bitcoin vs Gold: Which is the Better Inflation Hedge?

Metaverse Cam explained that each participating school will digitally recreate its campus, including its buildings, statues and walkways. Students who choose the metaversity learning experience will receive VR headsets that they will use to attend online lectures. It is unclear whether the VR classes differ from each college’s in-person classes.

“The idea is to make distance learning more personal with the interaction on the VR campus and to use the opportunity that virtual reality gives us to present things in ways that are not possible in the physical world,” explains Metaverse Cam. .

How did metaversities arise and which schools are participating?

The metaversity concept is a joint project of VR company Engage XR and VictoryXR, a team of VR education specialists. VictoryXR’s website states that its VR lectures will have synchronous and asynchronous options. Each online class will be “geographically agnostic”, allowing students and teachers to work together no matter how far apart they are in the world.

According to EdSurge, the Immersive Learning team at Meta (formerly Facebook) is funding the metaversity project.

“We want to create an ecosystem for learning in the metaverse,” Monica Ares, Meta’s head of immersive learning, told EdSurge. “We want to make sure that we are not only preparing the future workforce to interact with these technologies, but also to build them.”

The universities confirmed by VictoryXR as participants in the metaversity project include:

How does Gen Z respond to the concept of metaversities?

Metaverse Cam closed its TikTok by asking viewers if they believe metaversities could replace mainstream universities in the future; most commentators had negative reactions to the concept of VR school, but still didn’t understand the metaverse concept.

“Oh, so the university is being devalued even more,” joked a TikToker.

“Look at how they charge ‘technical fees’ and make it more expensive than actually going,” commented another.

“They force this shit so hard, is anyone even using the metaverse?” someone wrote.

Other TikTokers saw the potential of metaversities, intrigued by the possibilities they offer for higher education.

“No doubt it will be a big part of education in the near future, but the technology is still quite early, give it 5 years,” a TikToker noted.

“As long as it’s cheaper, yeah, bring it on, it’ll give so many more people the opportunity they didn’t have before,” said another.

Despite the potential benefit of metaversities, many commentators were still concerned about the logistics behind the concept. TikTokers argued that certain aspects of the college experience wouldn’t make sense when ported to a VR environment and vice versa.

“I’m not so sure about this… do you have to virtually walk across the campus to get to your online class? If so, I’m out, lmao,” said one TikTok user.

“Haven’t we seen how a fully virtual university absolutely ruins the experience? Except convenience such as travel time (including ??)”, another user wondered.

“The college is more important for the social opportunities that exist. Friends helped me find a job after I graduated,” one commented.

The post TikTokers divided on the concept of virtual reality ‘metaversities’ appeared first on In The Know.

More from In The Know:

K-Pop choreographer Bailey Sok brings her moves to Spotify: ‘As a Korean girl, it makes me so hyped’