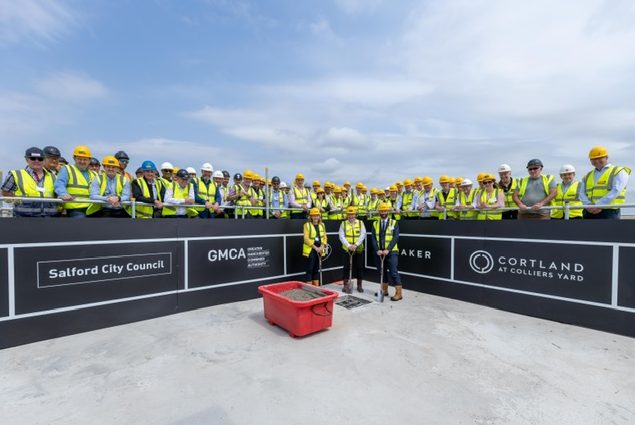 Cortland at Colliers Yard in Greengate, will offer 559 one, two and three bedroom rental apartments when it opens its doors to residents in the fall of 2023.

It also features a three-storey brick podium with shops, restaurants and bars. The project will also deliver a new public space open to residents and the neighborhood alike.

Cortland at Colliers Yard is part of the wider Greengate regeneration and is in a desirable location just minutes from Harvey Nichols, Selfridges and Manchester’s central shopping area.

The summit ceremony marked an exciting step in both Greengate’s wider master plan and Salford City Council’s cultural ambition to create an ambitious neighborhood in both Salford and Manchester city centres.

City representatives, including Salford Mayor Paul Dennett, and the Greater Manchester Combined Authority, including CEO Eamonn Boylan, were joined by Renaker and Cortland’s teams to mark the feat.

Daren Whitaker, MD at Renaker, said: “To have reached this important stage of the project on time, despite the difficulties of the recent pandemic, is a fantastic achievement and a testament to the tremendous efforts of the entire team.

“This landmark project is another important step in our broader regeneration plans.”

Victoria Quinlan, President – Europe at Cortland, said: “This is an important milestone in the construction of Cortland at Colliers Yard. It has only been made possible through the hard work and dedication of our teams and a strong partnership with Renaker. We look Looking forward to welcoming the first residents to our build-to-rent schedule and letting them experience our unique, resident-centric approach.”

Paul Dennett said: “Greengate is Salford’s original historic center and in the mid-19th century approximately two thirds of the city’s population lived in the Greengate district.

“The pace of transformation in Greengate in recent years has been astonishing, with the area once again becoming an incredibly popular high-density, mixed-use community, providing thousands of new, high-quality housing to support our significant population growth and local businesses. ”

Colliers Yard will consist of three carefully curated towers ranging from 43-51 stories high, each housing a mix of apartments and penthouses, as well as extensive public realm for the local community, including a new public park, tree-lined boulevard and a new public space. square that will once again frame the local landmark and Collier Street Baths listed building.