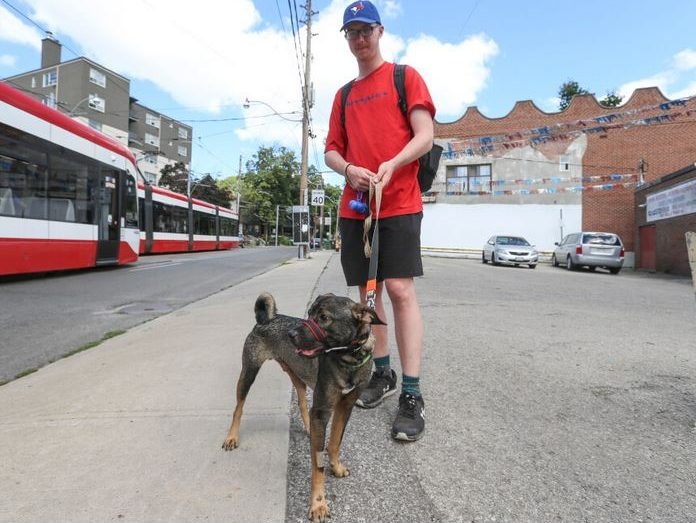 Toronto Police and Animal Services confirm they are investigating after a second report of an attack by a pit bull or bull mix dog in the east side of the city.

Curt Martin, resident of Leslieville, was the first to tell Toronto sun on June 23 that he and his small dog were attacked by a stray pit bull or bull mix dog in Greenwood Park and were lucky enough to escape with only cuts and bruises from the traumatic experience.

Now, another person, 23-year-old journalism student Callum Denault, came forward on Tuesday and said that he and his young dog, Louie, were also attacked around 5 p.m. last Thursday by what he believed to be the same dog — without a leash and without collar.

“We were lucky neither of us were injured,” Denault said. “But this dog was like he was chasing (his dog, Louie) and biting him. I struggled with the pit bull from behind and at one point I rolled on the ground with it.”

Denault said it all started when he was with his brother, mother and a family friend on Upper Gerrard St. and Coxwell Ave. and saw a commotion across the street.

“I saw the dog, a pit bull, go out into the street,” he added. “There was a group of people screaming. The owner was on the run from them. He had a split lip and it looked like he had been punched a few times in the face.”

Then Denault – who weighs six feet and has a black belt in taekwondo – ran onto the road to rescue the dog, weighing between 60 and 80 pounds, who had been running in the street.

But it ended up running back and lunging for his pet, who weighs about 40 pounds.

Denault, who had only minor scrapes and Louie a few minor bruises, said he took the pit bull again, lay down on it, grabbed him by the neck and wrapped his arm around his front.

The owner eventually came by to help and get the animal off the street, while the family friend called Louie over to her, he said.

“The owner ran away from us to talk to a police officer. He left me, a complete stranger, to hold his dog alone. I had to call him. I said, ‘Sir, I want you to come here and secure your dog.’”

Toronto Police Const. Rob Reid confirmed that officers attended the scene last Thursday regarding “a fight and dogs were involved”, but would not release any other details, citing both privacy and the fact that the incident is under investigation.