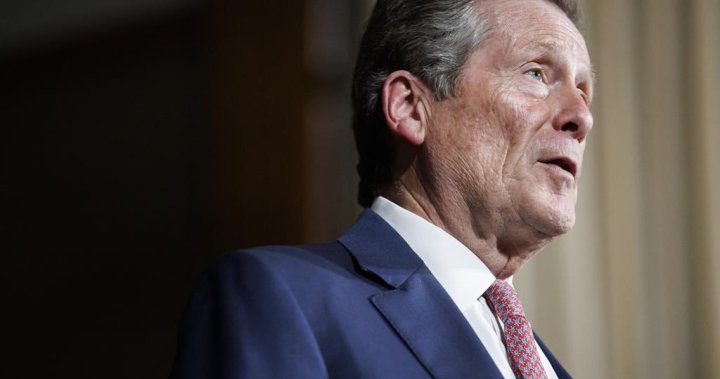 Toronto’s integrity commissioner says he will not complete his conflict of interest investigation into city mayor John Tory before Friday’s deadline.

“It will not be feasible for me before August 19, 2022 to gather all the necessary evidence, complete the required analysis, formulate my findings and issue a report in connection with the investigation I began on July 27, 2022,” wrote Batty.

He added that he has not established “at this time” in any way whether a violation of the Municipal Conflict of Interest Act has occurred.

“The fact that I will not complete my investigation before August 19, 2022 should not be interpreted differently,” he wrote.

Batty said under the City of Toronto Act, the investigation can only be resumed if the applicant or the respondent of the application requests it in writing between Oct. 24 and Dec. 5, 2022.

A complaint, filed by a citizen activist, alleged that Tory had a conflict of interest over its affiliation with Rogers Communications and a council decision to end regular ActiveTO road closures on Lake Shore Boulevard West.

In 2020, the city decided to close the eastern portion of the six-lane carriageway to provide more space for the public to access the waterfront while maintaining social distancing during the COVID-19 pandemic lockdowns.

The ActiveTO closures were less frequent in 2021 and have occurred twice so far in 2022.

On July 26, citizen activist Adam Chaleff said he had filed a formal complaint with the city’s integrity commissioner against Tory for participating in a council debate on ActiveTO.

In early June, Mark Shapiro, CEO of Toronto Blue Jays, wrote an open letter to Toronto city councilors urging them not to vote to extend ActiveTO.

“On the days ActiveTO was in effect on Lake Shore, our local fans experienced significant transportation delays as traffic has come to a standstill on all downtown routes,” the letter reads.

Tory has a long association with Rogers Communications, the owner of the Blue Jays. Tory was an executive for Rogers in the 1990s and still sits on the advisory committee of the family trust that controls Rogers.

Shapiro later said he supports ActiveTO, but wanted the council to recalibrate the program’s times and locations.

In a series of tweets last month, Chaleff said he believes Tory “violated the municipal conflict of interest law when he voted and talked about ending Lake Shore Blvd. ActiveTO closure.”

“I believe Tory has tried to serve two masters at once – Rogers and the public good – and that’s what the MCIA was set up to prevent,” Chaleff wrote.

In a statement emailed to Global News on Wednesday, Lawvin Hadisi, a spokesman for the Tory office, said the “record on the mayor’s integrity speaks for itself,” adding that the “timing of the complaint is certainly revealing.” .

“The mayor has fully cooperated with the assessment of the Integrity Commissioner and is confident that he has complied with the law and acted duly and in good faith in this matter,” Hadisi said.

Hadisi said ActiveTO is a “traffic issue affecting thousands of businesses and hundreds of thousands of residents,” adding that Tory has “no reasonably discernible personal interest in it, either directly or indirectly.”

Hadisi said the mayor “respects the integrity commissioner and his process”, and would not comment further “at this time”.

In a statement emailed to Global News on Wednesday, Chaleff said he will ask the Commissioner for Integrity “to resume his investigation into Mayor Tory’s ties to Rogers” after the election.

“While I am disappointed that voters do not know the outcome of this inquiry before voting, I appreciate the Integrity Commissioner’s effort to conduct a full, fair and prompt investigation into Mayor Tory’s apparent conflict of interest,” he wrote. he.

— with files from Global News’ Isaac Callan and The Canadian Press