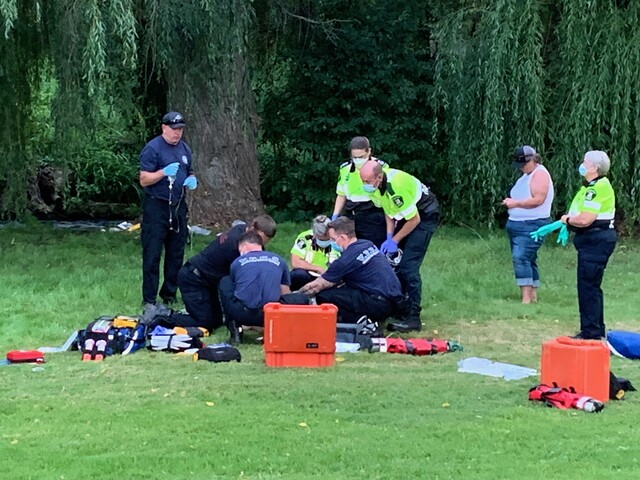 Paramedics performed CPR on the man for nearly half an hour in front of shocked onlookers who had packed the park for Friday night’s Polson Market.

The unconscious man was spotted about 100 yards upstream in the creek and pulled out of the water around 8 p.m. by two men who happened to be sitting on the grass nearby.

Scott Bishop and Randy Seip jumped into the creek and fished the man out before emergency services took over.

Bishop said the man, believed to be a resident of the homeless camp at the back of the park, drifted through the creek before he could jump in and retrieve him.

“It feels weird to see a body float by. I jumped right in. You can’t believe how strong the current was,” Bishop said.

The victim is said to be in his 80s and other camp residents said he did not drink or use drugs.

Multiple fire, ambulance and police vehicles swarmed into the park as the market settled down for the evening.

After attempts to resuscitate the man were unsuccessful, paramedics covered the body with a blanket.

People who knew the man said they saw him by the creek this afternoon.

It is unknown if he entered the water to cool off, as record heat grips the region.

Castanet has contacted Vernon RCMP for more details and will update as more information becomes available.