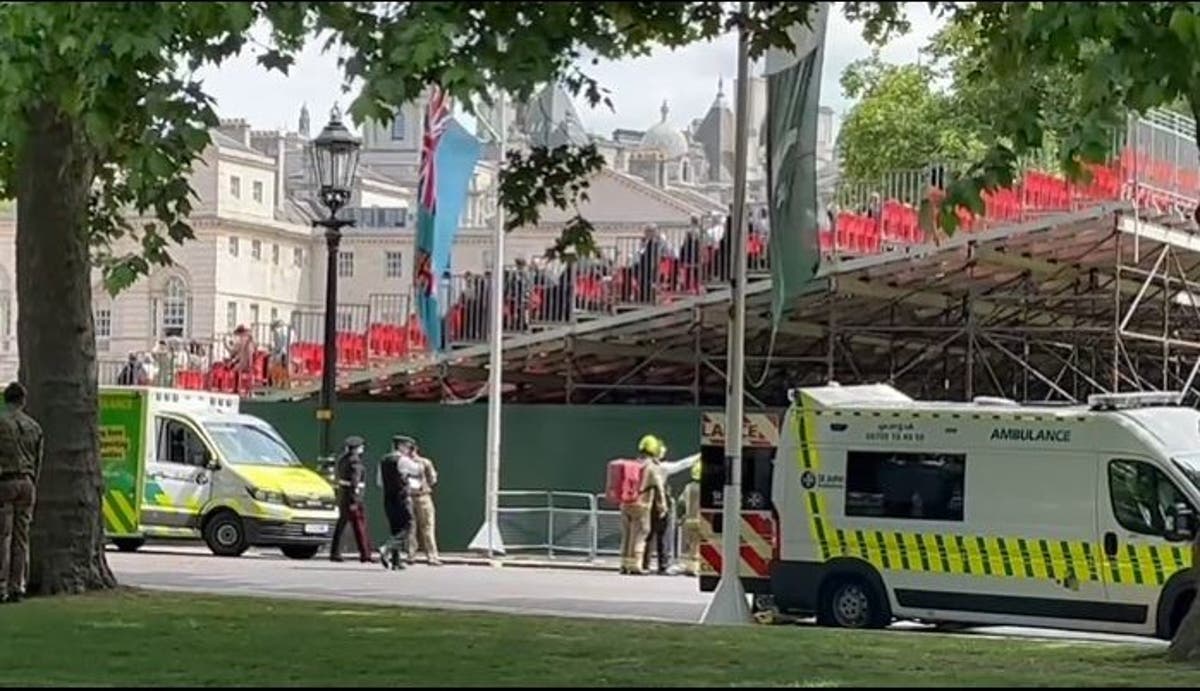 three people were rushed to hospital after part of the stand for spectators watching the Trooping the Color ceremony collapsed on Saturday.

Two others were treated at the scene by paramedics around 11am following the Horse Guards Road incident.

Part of the stand was cleared after the incident, while photos show a woman being taken away on a stretcher by St John’s Ambulance ambulance personnel.

The ceremony, which featured a parade by the Household Division and Horse Guards, was aborted after emergency services arrived.

A large crowd had gathered at the event, which is the Major General’s review of the parade ahead of the full event on June 2 for the Queen’s Jubilee celebrations.

Zoe Clark-Coates, a TV host and author who was among the crowd, wrote on Twitter: “What we just saw was terrifying, but we’re safe!

“Part of the floor in the stand collapsed and at least one person fell through. We pray for the injured and shocked. The stands are being cleared.”

A spokesperson for the London Ambulance Service said: “We worked with volunteers from St John Ambulance to treat five people on site.

They added that transport was later arranged for a third person to go to the hospital.

Another witness told the Mirror they heard a scream after the grandstand collapsed.

“The paramedics rushed in but started yelling ‘we can’t find her,'” they said.

“She was taken out after a few minutes and appeared to be okay but badly shaken and was put on a stretcher and loaded into an ambulance.

“The crowd was calm, but was later removed from that area. Then a second section had a similar collapse and the crowd was moved, but without anyone falling through.”

The Ministry of Defense confirms that parts of the stands collapsed on Saturday morning.

An army spokesman said: “During the Major General’s discussion of the Horse Guards Parade, two sections of the lookout unfortunately failed, resulting in a small number of injuries.

“Emergency services were called to help the injured and the rest of the crowds were evacuated safely from the stands.

“Safety is our number one priority and we are urgently working with our partners and relevant organizations to understand what happened and make sure it doesn’t happen again.”