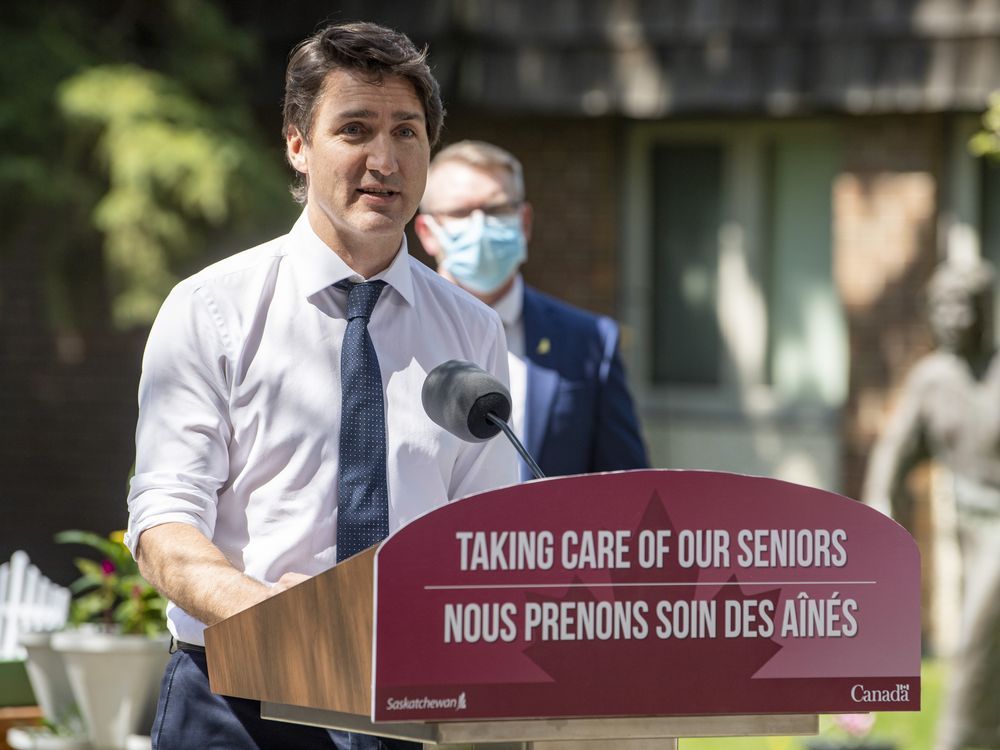 OTTAWA — Prime Minister Justin Trudeau canceled plans to appear in person at a liberal fundraising drive in British Columbia on Tuesday after RCMP warned that an aggressive protest outside the event could escalate if he arrived, a source close to the decision said.

The source spoke to The Canadian Press on condition of anonymity as they were not authorized to discuss the situation publicly.

Trudeau spoke about the issue on Wednesday during a stop in Saskatoon, which was also attended by protesters who were verbally aggressive with the Prime Minister’s RCMP protective details and initially blocked his exit from a local senior center.

The Prime Minister did not explain why he chose to speak virtually to the fundraiser in Surrey, BC, but expressed disgust at the “harassment, racial insults (and) threats of violence” aimed at the mostly South Asian attendees. when they arrived.

Witnesses at the protest reported hearing those in attendance being harassed for wearing turbans, among other racially motivated insults. A protester can be seen in a photo with a noose hanging from two flat sticks, imprinted with the words ‘treason’ and ‘Trudeau’.

“The safety of Canadians who choose to make their voices heard in politics should never be in question, as we were last night and as we are increasingly seeing across the country,” Trudeau said.

“The fundamental freedoms we have as a country that we enjoy as Canadians must be defended, must be protected. No one should feel threatened or harassed for their support of any political party. And I think we should all be vigilant about that.”

He said all levels of government are currently addressing the issue.

This is the second time in 10 months that aggressive protesters have prompted police to advise Trudeau to change his plan to speak at an event. A campaign rally in Bolton, Ontario, was completely canceled last August when dozens of angry protesters chanted obscenities against the prime minister who had lined up at the site.

He was followed by angry protesters for much of that campaign, which has led to some noticeable changes in the way his office handles his schedule. For example, specific event locations are no longer included in his published daily itineraries.

During the early days of the convoy protest in Ottawa in January and February, Trudeau and his family were evacuated from their home in the city for several days.

Other leaders, including NDP leader Jagmeet Singh and Bloc Québécois leader Yves-Francois Blanchet, have indicated they were given RCMP protection during the convoy while in Ottawa.

A request for access to information released by the Privy Council Office shows that 26 threats were registered against Trudeau and eight of his ministers between February 5 and March 23. Trudeau and Deputy Prime Minister Chrystia Freeland were each the subject of nine threats during that period.

The nature of the threats or actions to be investigated are not included in the release.

RCMP in BC said in a statement about Tuesday’s event that the protest group started out small but grew in number and was joined by cars, larger trucks and vehicles with trailers “driving in a convoy-like loop across the roadway”.

“Due to the size and composition of the protest group and for the safety of all those in attendance, it was decided that it was not safe for the Prime Minister to attend the venue,” the RCMP statement said.

The government source who spoke to The Canadian Press said the fear was that Trudeau’s presence would amplify the crowd and endanger everyone.

The Prime Minister’s Office and RCMP have jointly made the decision to cancel Trudeau’s personal appearance, the source said.

Trudeau is not alone in being followed by more aggressive protesters. In Peterborough, Ontario, Singh was chased to his car outside a provincial NDP campaign office two weeks ago.

On Wednesday, Attorney General David Lametti temporarily left a press conference outside his office when he was confronted by an anti-Israel protester who screamed in his face. Lametti returned as the protester left.

This report from The Canadian Press was first published on May 25, 2022.