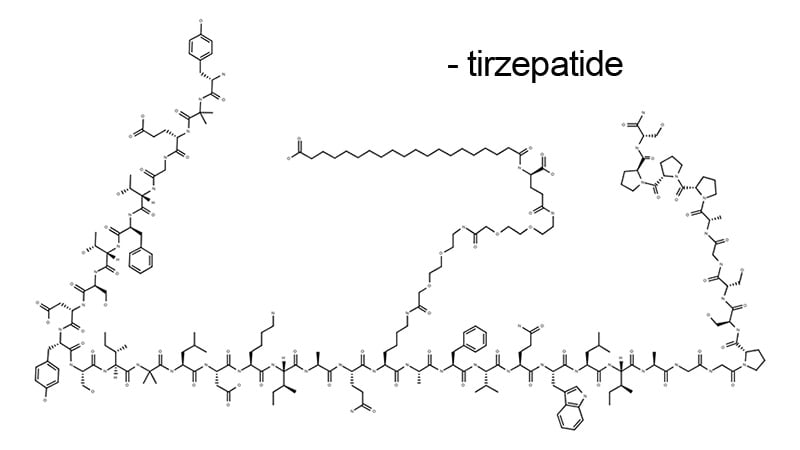 The “Twincretin” era for the treatment of patients with type 2 diabetes has begun, with the approval of tirzepatide by the US Food and Drug Administration (FDA) on May 13 for this indication, making it the first approved drug to act as a dual agonist for the two major human incretins.

Tirzepatide represents “an important advance in the treatment of type 2 diabetes,” Patrick Archdeacon, MD, associate director of the FDA’s division of diabetes, lipid disorders and obesity, said in a statement from the agency.

That progress is based on the technique of tirzepatide, which gives it agonist properties for both the glucagon-like peptide-1 (GLP-1) receptor and the glucose-dependent insulinotropic polypeptide (GIP). Several agents are already approved for use in the US from the class with single agonist activity at the GLP-1 receptor, including semaglutide (ozempic for the treatment of patients with type 2 diabetes; Wegovy for weight loss).

The FDA-approved label includes all three dosages of tirzepatide tested in the pivotal studies: 5 mg, 10 mg, and 15 mg, each administered by subcutaneous injection once a week. Also approved was the 2.5 mg/week dose used when starting a patient on the drug. Gradual up-titration appears to minimize potential gastrointestinal side effects during first-time use of tirzepatide.

Tirzepatide, which will be marketed by Lilly as Mounjaro, is set to hit the U.S. market with great anticipation, based on the results of five pivotal studies, all reported in the past year or so, that demonstrate the drug’s unprecedented efficacy for lowering A1c levels and leading to significant weight loss in most patients with an overall benign safety profile.

The effects of tirzepatide on A1c and weight seen in these studies were “impressive and likely to encourage use of this drug,” said Carol H. Wysham, MD, an endocrinologist at the MultiCare Rockwood Clinic in Spokane, Washington.

Tirzepatide received good news in several editorials accompanying the published reports of the pivotal studies. The first of these, a commentary by two UK-based endocrinologists, said that “tirzepatide appears to represent an improvement over current GLP-1 analogues, with improved glycemic and weight benefits without an additional drawback in terms of gastrointestinal side effects.”

The pivotal studies included direct comparisons between tirzepatide and a 1.0 mg/week dose of semaglutide, as well as comparisons with each of the two long-acting insulin analogues, insulin glargine (Lantus) and insulin degludec (Tresiba†

“These are the main comparators,” Wysham said. “Tirzepatide was appropriately compared to the best-in-class and most effective glucose-lowering agents currently available,” says Ildiko Lingvay, MD, an endocrinologist and professor at UT Southwestern Medical Center in Dallas.

“Given its excellent efficacy in both lowering glucose and weight, I expect tirzepatide to be rapidly absorbed by patients with diabetes,” Lingvay said. “The only limiting factor is cost,” she added in an interview, highlighting the major stumbling block that could limit tirzepatide intake.

“As with any new drug, access will be the biggest barrier to absorption,” agrees Alice YY Cheng, MD, an endocrinologist at the University of Toronto.

The lack of direct data for tirzepatide against the 2.0 mg/week semaglutide dose “leaves a clinical gap,” Cheng said. Tirzepatide “represents an improvement over semaglutide at the 1 mg/week dose, but we’re not sure compared to the higher dose.”

Another major limitation for tirzepatide at this time is that the mandatory cardiovascular outcome study of the drug, SURPASS CVOT, with approximately 12,500 patients enrolled, will not yield results until around 2025, leaving uncertainty about the cardiovascular effects of tirzepatide until then.

“We’re missing the cardiovascular outcome data — very important data will come” from that trial, Wysham noted. “There will be some reluctance to use the drug in high-risk patients until we see the results.”

And then there’s the cost issue, something Lilly hadn’t publicly addressed at the time the FDA announced its decision.

A cost-effectiveness analysis published by the US Institute for Clinical and Economic Review last February concluded that tirzepatide had a better impact on patient quality of life compared to 1.0 mg/week semaglutide for the treatment of patients with type 2 diabetes, giving it a modest pricing. pillow compared to semaglutide of about $5500 per quality-adjusted life-year gained. But the researchers who prepared the report admitted that the cost-effectiveness of tirzepatide was difficult to estimate without knowing the drug’s true price.

Mitchel L. Zoler is a reporter at Medscape and MDedge in the Philadelphia area. @mitchelzoler