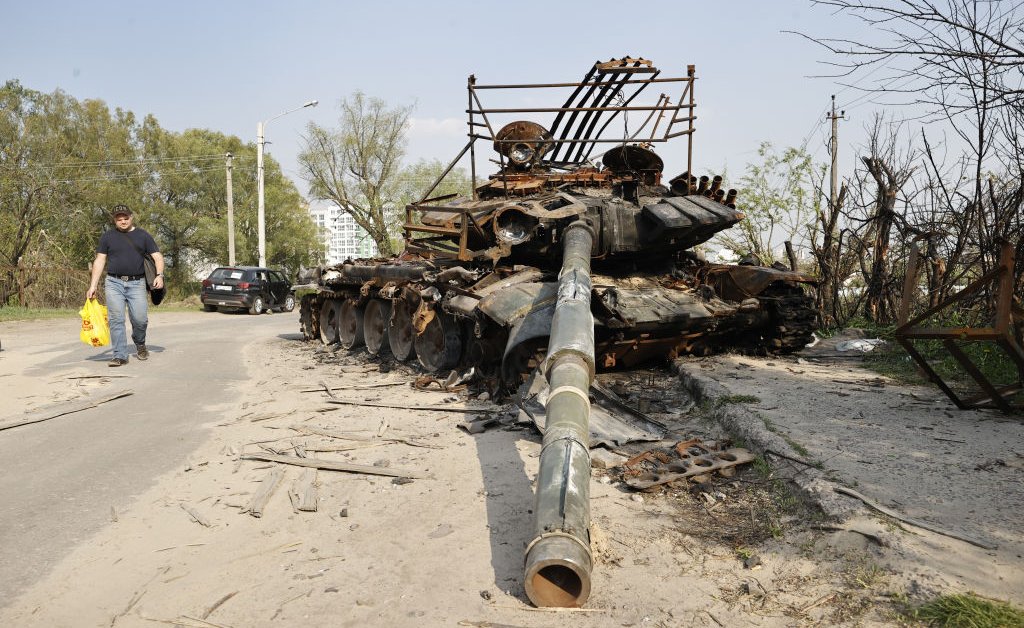 lIt has been said that given how massively outnumbered Ukrainian troops were at the outset of the Russian invasion, not losing the war is itself a form of victory for Ukraine. The difference between expectations and the surprising resilience of the Ukrainian military makes it easy to misinterpret the current situation in Ukraine’s favor. But not winning is still not winning. Ukraine is in much worse shape than is generally believed and needs and will continue to need a staggering amount of aid and support to actually win.

We love an underdog. We love a brave little boy who exceeds expectations. It nurtures hope for our ordinary selves and allows us to feel that we are on the morally superior side. This is why Ukrainian President Volodymyr Zelensky has appealed so successfully to the world. His defiance against all odds gave us someone to fight for against a bully. While we cheered on the ragged, outnumbered Ukrainians, we could also allay some of our shame by leaving those – to whom we had promised protection, “security guarantees” – to die alone in the snow and mud.

Unfortunately, Zelensky’s leadership and the outpouring of international military and humanitarian aid it has provoked have failed to prevent Ukraine’s cities, economy and society from being shattered in a shocking way. The fact that Kiev has not fallen and Russian troops have retreated to the east masks that Ukraine is in worse shape than portrayed in the media.

It is worth remembering that Ukraine has been fighting a Russian invasion since 2014. The simmering war in the Donbas killed nearly 10,000 people between 2014 and February 2022, but little or no military progress was made. Now Ukraine is fighting with that same army in an extensive theater against a larger counter force. It is a testament to the sheer courage of its troops that since February 24, Ukraine has managed not only to hold its line, but also to force the Russians to withdraw from Kiev, Kharkov, Chernigiv and the surrounding areas. .

Nevertheless, Russia now holds significantly more Ukrainian territory than before February 24. Putin’s army has taken control of Kherson, whatever is left of Mariupol, all the intermediate area, and now not just Luhansk and Donetsk, but the entire Donbas Oblast. For example, while the Ukrainian authorities controlled about 60% of Luhansk before the recent Russian invasion, Russian forces now control 80% of the region. They also have about 70% of the Zaporizhye region. Cumulatively, this represents an increase in Russian-occupied territory of about 7%, including Crimea, before February, more than double what it is today. In that sense, not losing is much more like losing than winning.

Ukraine’s defense ministry is not releasing casualties to keep morale up, but experts believe it has lost at least 25,000 troops — up to 11,000 dead and 18,000 wounded — since the February 24 invasion. More than two and a half months into the war, Ukraine’s losses are at least 10% of their now undoubtedly depleted army of less than 250,000. However, this is much, much less than the Russian casualties, believed to be over 35,000, and backed by an astonishing loss of weapons and equipment, such as tanks and warships.

Ukraine’s relative success is in part due to the weapons donated by at least 31 Western governments. The UK has sent anti-tank, anti-aircraft and anti-ship missiles, air defense systems and other weapons; Slovakia the S-300 air defense system; the US drones, howitzers, missiles and anti-armor systems; and this is just a sampling. These weapons have enabled Ukraine to maximize its home advantage, exploit the greater determination of its forces and exploit Russia’s military weaknesses and apparent lack of adequate planning and preparation. Without these donations, Kiev could have fallen long ago.

As Ukraine is awash with weapons and other military supplies and equipment, Defense Ministry officials and volunteer fighters are quietly admitting that they are unable to absorb that much aid. Much of the equipment and weapons require new training to use. Even if that’s available, it takes time. Likewise, the influx of 16,000 or more foreign volunteer fighters seems like a decisive boon, but in fact almost none of them had any military experience or training. In most cases, they turned out to be no more than extra mouths to feed, according to Defense Department officials and some volunteer foreign special forces on the ground.

Economically, Ukraine survives, but only that. The sanctions against Russia, which are expected to cause a GDP contraction of less than 7%, are rather unfavorable compared to the 45-50% GDP collapse Ukraine is facing. At least 25% of businesses have closed, although the number of businesses that have closed completely has fallen from 32% in March to 17% in May. But a blockade of Ukrainian ports in the Black Sea – Mariupol, Odessa, Kherson and others – by the Russian navy prevents both the import of fuels to power the agricultural sector, as well as the export of grain and other Ukrainian products. The inability to export costs the Ukrainian economy $170 million a day. Meanwhile, Russia is targeting Ukrainian fuel depots, grain silos and farm equipment warehouses, damaging already ruptured supply chains. The energy sector faces default as so few Ukrainian citizens and businesses can pay their electricity bills.

May is not only a critical agricultural month, but it is also the time when Naftogaz usually starts buying natural gas to store it for the cold Ukrainian winter. The state-owned energy giant was in a dire state before the invasion, and its CEO asked the Ukrainian government for a $4.6 billion rescue package in September 2021. Now, with very tight gas markets and no money, it’s unclear how the country can prepare for winter, when temperatures could drop below 20 Fahrenheit. Besides the prospect of a tragic winter of 2022-2023, most of Ukraine’s coal mines are located in the Donbas, where the Russian offensive continues.

The White House is reportedly considering canceling Ukraine’s national debt, which would no doubt help Bankova (the Ukrainian White House equivalent). That includes, among other efforts, the €15 billion in debt securities that the European Commission plans to issue to cover Ukraine in the coming months. However, this will not lure back the more than six million women and children who have fled Ukraine. If men were allowed to leave, the numbers would almost certainly double.

Recent reports of 25,000-30,000 returning to Ukraine daily from abroad are encouraging, but Ukraine suffered a brain drain before the invasion. The poorest country in Europe, many citizens already tried to leave. Before the war, Ukrainians were the third largest immigrant population in the EU, after only Morocco and Turkey. Now the International Labor Office estimates that 4.8 million jobs have been lost in Ukraine, rising to seven million if the war continues. And after many months of war, children will have settled in new schools abroad, mothers will integrate into their new worlds and both will wait for their husbands and fathers to join them. Some, of course, will return to Ukraine, but many will prioritize the comfort of their families and the opportunities of their children over patriotism.

Most disturbingly, many Ukrainians still in their country are beginning to wonder how it will rebuild itself. The war has torn the fabric of society. A mother in Poltava said she no longer trusts the neighbors she has lived next door for 40 years, people she considered family before the invasion. A young volunteer, formerly a civil society activist, described how he hunted saboteurs and began to see Russian sympathizers everywhere. Ukrainian native speakers of Russian, who make up at least a third of the population, feel uncomfortable or even afraid to use their native language. Confidence is shattered, even if nationalism is motivated. However quickly Russia is beaten back, rebuilding communities will be a challenge.

The US government decided in May to symbolically return some of its diplomatic staff to Kiev, partially undoing the swift, defeatist withdrawal when they assumed Kiev would fall within days. President Biden has even, finally, nominated a US ambassador to Ukraine after more than three years of leadership gap. The message these and EU gestures send is important. But despite our desire to see in Ukraine’s unparalleled survival a story of David defeating Goliath, and to cheer ourselves up for donating the catapult, the country is seriously, dangerously weakened.

Ukraine needs more than symbols and more than weapons. Not losing is not winning, and it will take a long and deep commitment from the Western world to help Ukraine both win and heal.