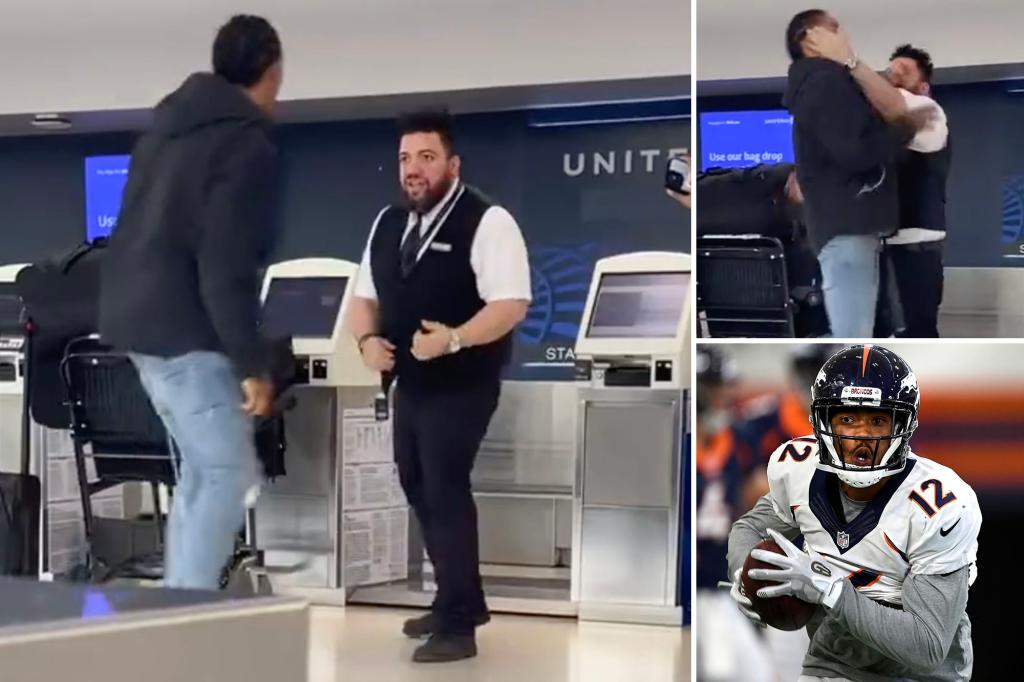 The United Airlines employee who was caught last week watching a shocking video fighting a former NFL player at Newark Airport has been fired, The Post has learned.

“United Ground Express has informed us that the employee has been laid off,” a representative of the airline said in an email, referring to the company’s affiliate subsidiary.

The viral footage captured the unidentified employee pushing ex-Denver Broncos cornerback Brendan Langley, 27, who then unleashes a flurry of punches that staggered the employee around 11 a.m. Thursday.

The dazed, uniformed staffer then raises his dukes and punches the much bigger athlete in the face.

“You saw that s-?” Langley yells at a bystander before delivering a punch, causing the worker to fall to the ground, leaving him bleeding on the head.

The bloodied United worker stumbles back to his feet and confronts the footballer again.

‘Would you like some more? He wants more!” Langley yells at him.

Langley, who is now a recipient of the Calgary Stampeders in Canada, has been arrested on charges of simple assault, the Port Authority told CNN.

It was unclear from the clip who exactly dealt the first blow, but the now former airline employee has not been charged, according to TMZ.

Another video shared online of the incident appeared to show Langley taking the first punch.

The fight is said to have started when Langley used a wheelchair to transport his luggage — rather than a $5 luggage cart, the Daily Mail reported.

Langley raised the incident on Twitter, writing: “yall aint off the hook… worst customer experience in the entirety of my life on heaven!!!!” he then claimed in a tweet that he was attacked by the Allied Worker and defended himself.

A United representative told The Post in an email Monday that the company “does not tolerate violence of any kind at our airports or on board our aircraft and we are working with local authorities to investigate the matter further.”

Meanwhile, the Canadian Football League’s Calgary Stampeders said they are investigating the incident involving their player.

“The Calgary Stampeders football club is aware of the reports about Brendan Langley,” the Stampeders told CNN in a statement.

“The team is currently investigating the matter to find out full details and will not comment further until the investigation is complete,” the team added.

The University of Georgia star was drafted in the third round of the 2017 draft and played in the NFL 16 times before moving to Canada this year.

The Port Authority police have not responded to an investigation into possible charges against the dismissed worker.