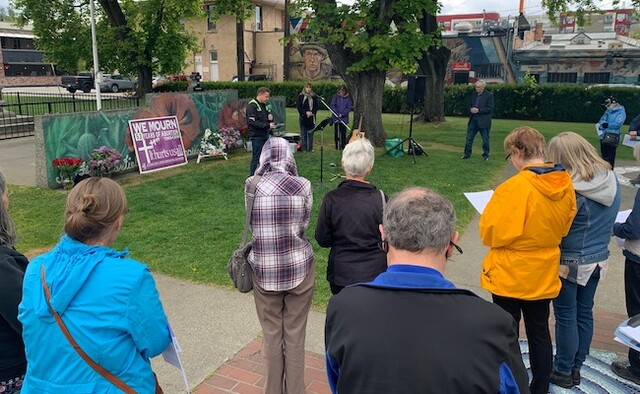 Organizers of an anti-abortion rally in Vernon say the issue’s resurgence in US politics has added no urgency to their protests.

“The urgency has always been there,” Lydia Melesko of Vernon & Area Pro Life said during the afternoon meeting at the cenotaph Thursday.

“Life has always been precious…I don’t see the US as a problem here.”

Music and prayers were offered during the solemn ceremony, which drew about 30 people.

It was one of several across the country coordinated today with a major March for Life rally outside parliament in Ottawa.

The protests come as the landmark 1973 Roe v. Wade case is back in the headlines in the United States following a leaked Supreme Court decision that the case will be quashed.

Melesko said she does not foresee a change in Canada’s abortion law, despite the debate south of the border… “but there is always hope.”

“The first right is the right to life… without it, no other rights have meaning or purpose,” she said.

Literature handed out at the event said 100,000 abortions are performed each year in Canada.

a research co. and Glacier Media conducted last month, before the US leak, found that 44 percent of Canadians believe abortion should be legal under all circumstances, down four points since 2020.

Meanwhile, the federal government said this week it is giving $3.5 million for projects to improve access to abortion services in Canada.