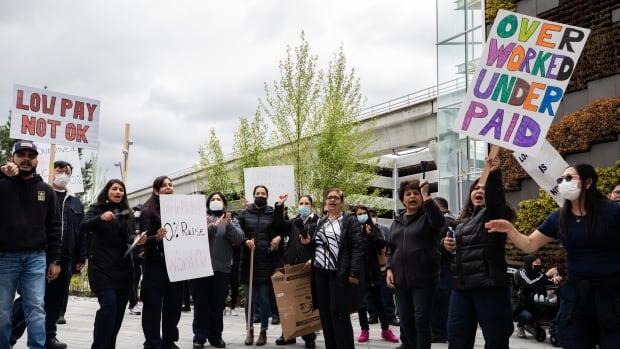 Dozens of security officers gathered outside Vancouver International Airport on Monday to call for better wages and better working conditions.

Dave Flowers, president of the International Association of Machinists and Aerospace Workers District 140, said many security screeners laid off during the pandemic did not return to work as demand for travel increased. Those who did return faced substandard wages and challenging working conditions.

“We’re talking about management issues, breaks not being respected — that’s lunch and toilet breaks — health and safety issues, ill-treatment in general,” he said.

The circumstances have led to more departures, he said, creating a “vicious circle” of asking the remaining workers to do more for less.

Flowers said Monday’s meeting was not about negotiations or strike action, but was organized to raise public awareness and was attended by workers who did not work shifts.

At the coast8:21Airport staff say they are burnt out and skip breaks, even breaks in the toilets, just to keep the huge security lines moving, but they still can’t keep up. We are joined by their union head to find out more.

Airport staff say they are burnt out and skip breaks, even breaks in the toilets, just to keep the huge security lines moving, but they still can’t keep up. We are joined by the head of the International Association of Machinists and Aerospace Workers for more information

Passengers at airports across the country have experienced longer than usual wait times at security in the past month.

The Canadian Air Transport Security Authority (CATSA), the federal Crown Corporation responsible for all passenger security checks, outsources security services at several airports to outside employers, such as Allied Universal at YVR.

“There is no responsibility for the outside contractors, which is why we are in the situation we are in right now,” Flowers said.

CATSA says it is in the process of hiring hundreds of additional employees.

Flowers said he welcomes the employees, but notes it will take time to provide them with appropriate training and security clearances. In the meantime, he said, new employees could be placed in positions that don’t require full training, forcing experienced staff to work longer days to absorb the rest.

While hiring is an important step, Flowers believes employee retention is a key issue.

†[Hiring] is a step in the right direction, but without addressing the issues you are not going to hold people and we will be back to square one when the airloads increase in the summer.”

YVR says operations were not affected by the rally.

Flowers says travelers should be patient before heading to the airport.

“Our members didn’t make these setups and try not to be mad at the screening officers if you get to the front of these setups,” he said. “They understand your frustration and they work as quickly and safely as possible to make sure everyone gets through.”