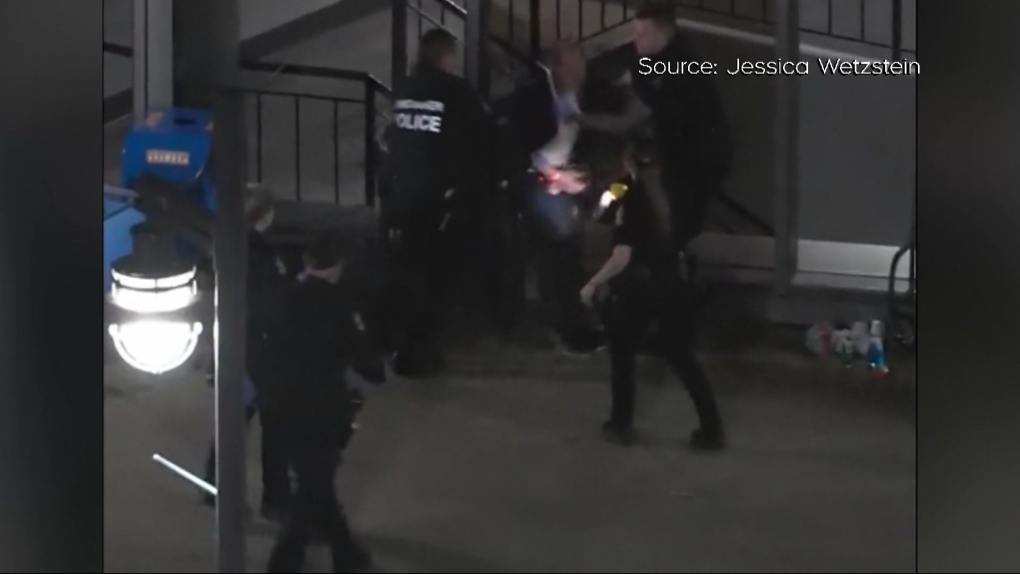 It happened near Rogers Arena on Saturday. Vancouver police said someone called 911 about a suicidal man acting erratically and putting himself in danger.

Jessica Wetzstein posted parts of the incident on social media. In her videos you can hear how she is shocked that the man gets a tasered.

“Why did they do that? He didn’t resist in any way,” you hear them say.

The video shows six police officers standing in a semicircle around the man, and without notice, a female officer releases the taser.

The VPD confirmed the man had a mental health crisis and when officers asked him to go to the hospital for a psychological assessment, he declined.

“It’s terrifying to think he’s the one who will deal with a mental health crisis,” said Sarah Blythe, a Downtown Eastside advocate. “Who would ask for help on a suicide call when that’s the help that came?”

“I have seen compassion from the police on many occasions, but I have also seen the police resolve things where they create a much worse situation than needed,” she said.

In an email, Sgt. Steve Addison said police have the authority to arrest anyone they believe is a danger to themselves or others and take that person to a doctor for assessment. He added that they are also authorized to use as much force as necessary while performing their duties.

“Electric energy weapons are carried by specially trained VPD officers and are used to prevent bodily harm to police and the public. They can also be used to prevent a person from injuring themselves,” said Sgt. wrote Addison.

But Rob Gordon, a professor of criminology at Simon Fraser University, said there’s reason to take a closer look at the use of a taser in this situation.

“Based on the limited footage I’ve seen this afternoon and my involvement in both the national and provincial reviews following the Braidwood investigation, I suspect there is enough doubt to warrant an investigation into the conduct of the Braidwood. agents regarding their decision to use a guided energy weapon,” he told CTV News.

Questions are also being raised about the officers’ behavior after the man was tasered.

Minutes after the incident, while some officers were tending to the man, a male officer punched the female officer firing the guided energy weapon.

When asked why that happened, Sgt. Addison wrote, “(It) would not be appropriate to speculate without full context, but it is common for police officers to use non-verbal cues to check on each other during dynamic and stressful situations. This is sometimes referred to as buddy-checking.”

“I can’t imagine any context in which anyone would be happy to Tase a suicidal person. It’s downright outrageous,” she said.

The man was taken to hospital for a psychological examination, police said.

He was also wanted on two warrants and was taken into custody.