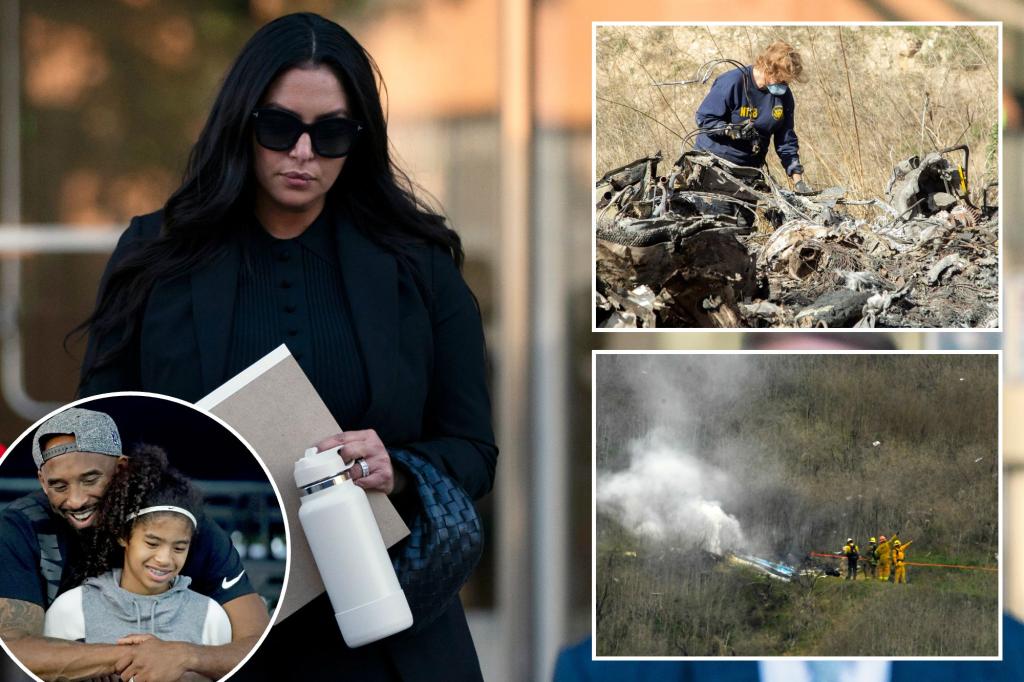 Vanessa Bryant sobbed in a Los Angeles court on Wednesday as her attorney described how sheriff’s deputies and firefighters shared photos of the mutilated remains of her late husband Kobe Bryant and daughter Gianna after they were killed in a helicopter crash in 2020.

The 40-year-old widow, who wore a fitted black suit and still had a band on her left ring finger, wept into a tissue when the court heard a deputy sheriff even called her loved ones “piles of meat” in a deposition.

“January 26, 2020 will always be the worst day of Vanessa Bryant’s life,” Bryant’s attorney Luis Li told the jury during opening statements. “The employees of the province went to investigate and took photos as souvenirs. She poured salt into an unbearable wound.”

Bryant’s federal lawsuit for invasion of privacy was launched in federal court on Wednesday, more than two years after the NBA Hall of Famer was killed along with the couple’s 13-year-old daughter and seven others in a January 2020 helicopter crash in Calabasas.

She is seeking unspecified multimillion-dollar damages in her Los Angeles County lawsuit over graphic snapshots of the wreckage allegedly passed on by first responders.

The photos were shared on “at least 28” [Los Angeles County sheriff’s deputies] devices and by at least a dozen firefighters,” some of whom praised the photos as trophies, “in a bar contemplating mutilations and showing the photos over cocktails at an awards ceremony,” the Bryant lawsuit alleges.

Li said one of the officers responding to the crash site walked around the wreckage and took close-up photos of the NBA legend’s dismembered body parts.

A deputy sheriff took a firefighter to the crash site where he identified possible body parts and the firefighter took photos, Li said.

In a deposition heard in court, Det. Scott Miller said the photos were sent to him and he asked his wife if she wanted to see the horrific photos, but she said no.

“I told her there were piles of meat,” Miller said in an interview, then laughed loudly into the recording.

Miller continued to say that Los Angeles County Sheriff Alex Villanueva and others in his department were confronted with deputies sharing the photos at a bar and with family, but Villanueva denied having knowledge of a complaint filed with his department.

Li said a man who was at a bar in Norco, California saw Deputy Joey Cruz sharing the photos on his iPhone with a bartender. Li played a video of the encounter, which showed the bartender wincing and stepping back in shock as he looked at the phone screen.

Moments later, Cruz was seen laughing at the bar. The man who saw Cruz sharing the photo reported it to the sheriff’s office, he said.

Around the same time, Li said, a provincial firefighter’s wife also reported to fire officials that several first responders shared and discussed the graphic crash photos at an awards ceremony.

The sheriff’s officers were told to wipe everything on their phones and buy new ones, the attorney claimed.

Villanueva was questioned a month after the crash over reports of his officers sharing photos. The sheriff said it was not uncommon for officers to take photos of the dead bodies in incidents and collect them in “death books” as mementos.

In a separate video, Villanueva clarified that only coroners and National Transit Safety Board officials are allowed to take photos of these types of incidents for investigative purposes, and no one else is allowed to.

“Tolerating this kind of behavior creates a culture of insensitivity,” Li told the jurors, who were selected on Wednesday.

Lawyers representing Los Angeles County wrote in a lawsuit that there is no evidence that the images have been shared publicly.

Chester also struggled to keep his composure as his attorney, Jerry Jackson, described the horrific way his wife was found by first responders.

Jackson said the bodies of Sarah and Peyton were found in a ravine 30 meters away from the impact site. Sarah’s torso was cut open at the waist and her organs, genitals, colon, fallopian tubes and intestines were scattered among the bushes in the canyon and surrounding areas.

The violent scene was one of several photos shared by several sheriffs and firefighters, Jackson said.

“Our Darkest said Mr. Chester thought that someday, somewhere, somehow, those responsible…will be brought to justice,” Jackson said. “Today is that day.”

Jackson said the devastated father has struggled with the deaths of his wife and daughters and that he had started drinking at a certain low.

Judge Walter indicated that the trial would take about a week and be divided into two phases, according to City News Service.

The first stage of the trial would address Bryant’s federal claims that the taking and distribution of photos by district personnel violates their constitutional rights. The claims of the state law would be argued during the second phase.