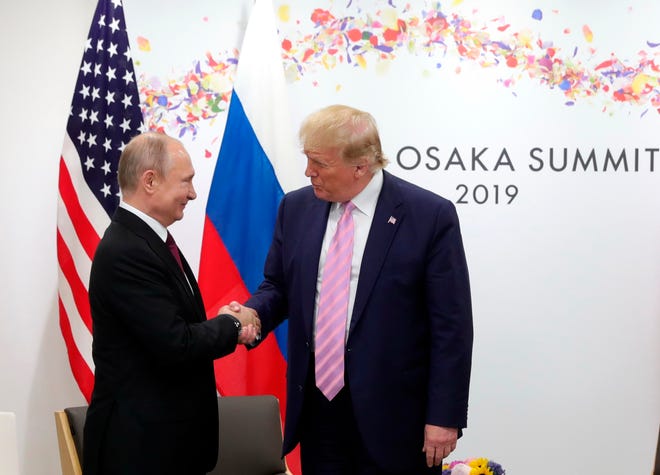 The claim: Donald Trump and Vladimir Putin met on July 26 in DC

Former President Donald Trump returned to Washington, DC, in late July, making his first appearance in the nation’s capital since leaving office in 2021. A Facebook post claimed that during his brief visit, Trump had a high-profile meeting with a controversial world leader.

“Important news! Trump and Putin meet in DC today!” read the July 26 post, which was shared more than 250 times in one day.

Trump gave a speech to the America First Policy Institute on July 26, but there are no reports that Russian President Vladimir Putin was in the US. Putin’s last documented international visit was to Iran, and a slew of US sanctions against him in light of Russia’s invasion of Ukraine make it unlikely that he would be able or willing to come to the country.

Follow us on facebook!Like our page to get updates on our latest debunks all day long

USA TODAY reached out to the user who shared the claim for comment.

Putin’s last known trip to the US was in 2015, when he addressed the United Nations General Assembly in New York City.

The US Treasury Department announced sanctions against Putin in February, including the blocking of all of his US “property and interests” after Russia’s invasion of Ukraine.

In May, Russia’s Foreign Ministry announced that the country is permanently banning nearly 1,000 Americans from entering its borders, including President Joe Biden and Vice President Kamala Harris. Trump, who invited Putin to the White House during his tenure, was not on the list.

According to the Kremlin’s website, Putin’s most recent foreign visit to Iran was on July 19 marked Putin’s first foreign trip since the invasion of Ukraine, as reported by CNN.

Based on our investigation, we rate the claim that Trump and Putin met on July 26 in Washington DC to be FALSE. Although Trump delivered a speech in the country’s capital that day, Putin’s last known foreign trip was to Iran. Current US sanctions against him also make it unlikely that Putin would have come to the country.

Thank you for supporting our journalism. You can subscribe to our print edition, ad-free app or electronic newspaper replica here.

Our fact-checking work is supported in part by a grant from Facebook.