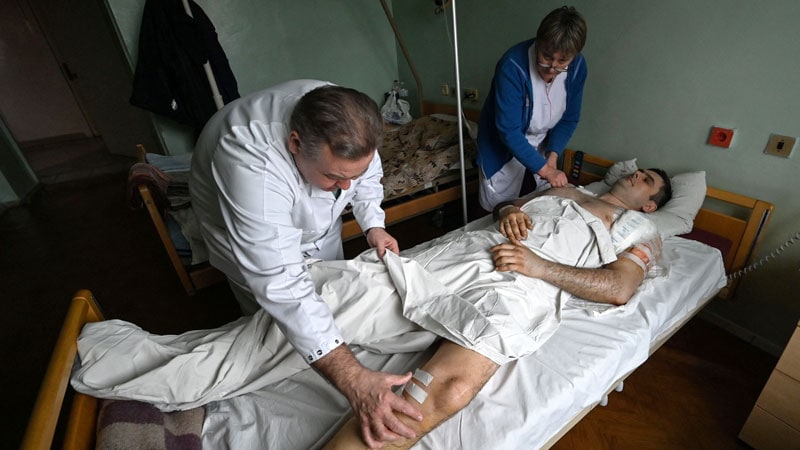 France, Ukraine — Igor Deyneka, MD, a 40-year-old anesthesiologist and intensive care specialist in Rivne, Ukraine, and eight compatriots trained in war medicine provided by the Union of Medical Care and Relief Organizations (UOSSM France) in Metz, France (see: Ukraine: A French NGO opens a training center for war medicine in Lviv). The doctor spoke to Medscape French Edition before returning to Lviv, Ukraine, where he will train compatriots in triage and care of the injured.

Medscape: Three months after the start of the Russian invasion on February 24, what are your most urgent medical needs in Ukraine today?

Debt: We have no shortage of doctors. We have them both on the front line and supportive from behind. What we do need is that health care providers, not just doctors, are trained to practice in wartime so that they know how to deal with ‘trauma’, how to respond in a battlefield and how and where to evacuate. We also need suitable equipment for the battlefield, evacuation and hospital.

Medscape: What exactly are your equipment needs?

Debt: What we need most, and this may surprise you, is tourniquets, which allow us to stop the bleeding so we can stabilize a patient, eventually move them, and then treat them. In the hospital we also need small ultrasound machines, like the ones we had during this training, that are used together with a smartphone to detect internal bleeding and help us determine more quickly what to do, whether to take the patient to the hospital. to be taken to hospital. operating room to stop the bleeding or evacuate them quickly.

Medscape: Did you have any personal war medicine experience before the conflict that started this year?

Medscape: What did you learn from this training by UOSSM France?

Debt: This training, which was based on the Syrian frontline experience of Raphaël Pitti, MD, training director at UOSSM France, gave us the opportunity to acquire new practical skills, which we will use on the frontline or in our fight for freedom, but also to see what equipment can be useful to us, such as the ultrasonic devices I mentioned.

Medscape: As a doctor, are you a target of the Russian soldiers?

Debt: In 2015, the place where our military medical teams worked was very close to the front, and that hospital was bombed. We were constantly targeted during medical evacuations. Even when we put the “red cross” on our vehicles, we were targeted. Since the start of the Russian offensive on February 24, we have not felt safe anywhere in the country. The four major cities in the country have been bombed. The Russians deny our existence. They don’t see us as an independent nation, but rather as other Russians who have supposedly gone astray. We don’t just fight for our freedom; we fight for our existence.

Medscape: What are the most common injuries Ukrainian doctors need to treat?

Debt: It depends on the situation and the city. The Russians launch bombs and aim missiles or shrapnel [shells filled with ball bearings] with us, but in the east of the country people can also be injured by firearms. We’re dealing with blast wounds, crush syndrome, and gunshot wounds. We have to deal with all of this at once. The difficulty is that one minute it can be calm and the next we have to deal with the arrival of 50 or 80 wounded at once in the hospital. Caregivers need to know how to react when these situations arise. It is a challenge for the Ukrainian healthcare system and that is why it is important that our teams are trained in these techniques.

Medscape: Can you easily evacuate the wounded?

Debt: In the east, the Russians have air superiority and we have to be at least 200 kilometers from the front to consider evacuation by helicopter. Helicopters cannot take off or land closer to the front because they are too vulnerable. So most of the time transfers are made by land, mainly by train. We are not evacuating the injured from the country, but Ukraine is transferring them from the eastern to the western part of the country to place the injured in safer locations. In the easternmost part of Ukraine, the Russians are constantly bombing, and it is not possible to evacuate the wounded, who have been forced to live underground for several months.

Medscape: Do you feel ready to pass on the war medicine training you just received?

Debt: I have already been a trauma medicine instructor, but we need to develop a course that fits the situation in Ukraine. The actual trauma medicine is often the same, but we have to familiarize ourselves with the teaching methods. We need to adapt the training to be as effective as possible to train the most caregivers, so that this knowledge is passed on and used in the best possible way and we can save the largest number of victims. If we achieve that, then this is [training by UOSSM France] will be a success and will be an important support that France will provide to our country.

This article has been translated from Medscape French edition.