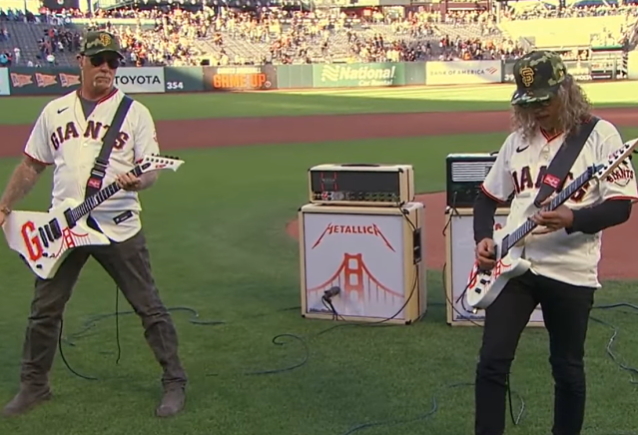 METALLIC and the San Francisco Giants held the eighth annual “Metallica Night” on Tuesday, May 24 at Oracle Park — formerly AT&T Park — in San Francisco as the giants took it upon himself New York Mets† Guitarists Kirk Hammett and James Hetfieldplayed a metal version of the American national anthem, while bassist Robert Trujillo delivered the “Play Ball!” Announcement. Watch the video of the national anthem’s performance below.

When the eighth annual “Metallica Night” was first announced in February, METALLIC said in a statement: “It’s a tradition that we’ve missed the past two seasons, so we’re really excited about the return of Metallica night in Oracle Park with our very own baseball team, the San Francisco Giants† This year marks the eighth time we’ve taken the field for the national anthem, first pitch and a few other pre-game shenanigans.”

Hammett added: “It’s great. It’s a lot of fun. It’s a good opportunity for us to interact with our home team, our hometown and with the people of the Bay Area in San Francisco. And for me it’s really nice to play the national anthem can play.”

Hammett told ESPN.com that he feels the version of the national anthem he plays is “really unique and different”, and it’s great that he can play it for his home team and the audience in his hometown.

METALLIC has always had strong ties to the Bay Area sports scene: the band has performed before too Golden State Warriors basketball games and San Jose Sharks hockey matches.