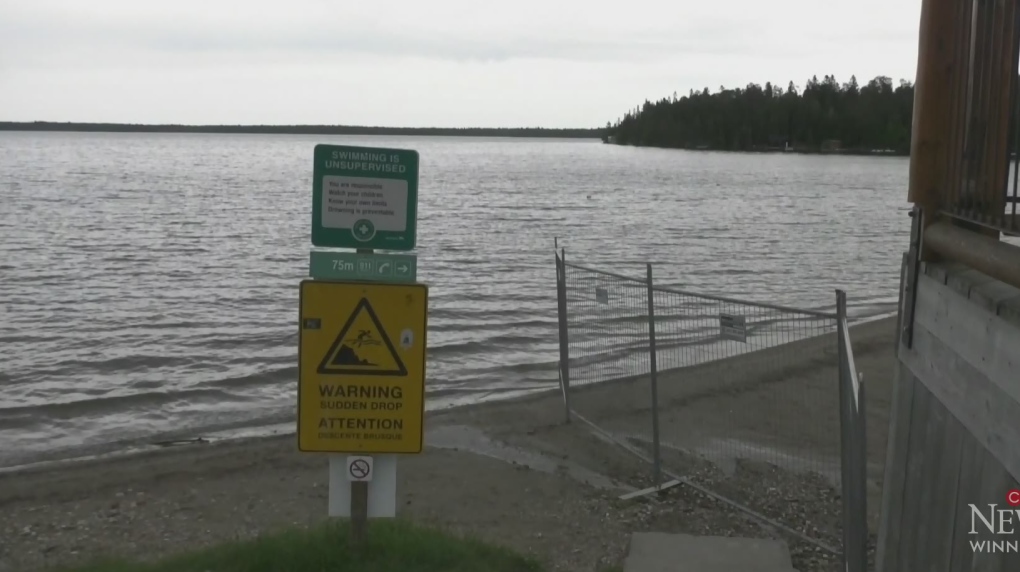 Businesses near Crescent Beach, a popular destination in the Whiteshell, fear a county shutdown will hurt vital tourism.

The hot weather will see many flock to Manitoba’s beaches this weekend, but no one on West Hawk Lake will visit Crescent Beach. The province cordoned off the beach on Tuesday after flooding damaged the adjacent seawall.

Amy Syrota, who has a seasonal spot a few minutes away, visited the closed beach on Saturday.

“I’ve been coming here for years. Basically all my life, since I was little. So seeing this is really devastating and it just sucks,” she said.

Businesses along Crescent Beach say the county did not consult them before closing the area.

“I’ve spoken to five of the six businesses on the harbor front, including the marina, and no one has been notified of the beach’s closure,” said Shaun Harbottle, the owner of Crescent Beach Cottages.

“Made for a tough weekend as we all placed our orders expecting a 36 degree weekend, you guys are going to be busy.”

Harbottle said he met with county officials a few days before the fencing went up and was not informed that the entire beach was closing.

“There was no talk of closing the whole beach. There was talk of maybe half of the beach being closed and part of the parking lot where the beach wall is damaged,” he said.

In a statement to CTV News on Thursday, the county said it is working on repairing the seawall.

“The county has hired an engineer to assess damage to the seawall and needs repairs to make it safe and allow public access to the beach – this assessment and reporting of the repairs required and address is ongoing. part of the statement reads.

The county said it would keep the Whiteshell Cottagers’ Association, residents, business operators and the South Whiteshell Chamber of Commerce updated as more information becomes available.

As for businesses and residents in the area, they say they haven’t seen any updates or progress.

“The beach is vital,” Harbottle said. ‘You have two months of good weather in Manitoba, don’t you? I don’t think anyone wants to be on the beach in December.”

Harbottle noted that Father’s Day and Canada Day are big money-makers for businesses in the region, something that could be hampered by the beach’s closure.

“I always come to this beach, and I bring my friends and my family here. It probably won’t happen this year,” Syrota said.

CTV News has contacted the county and the Whiteshell Cottagers’ Association.