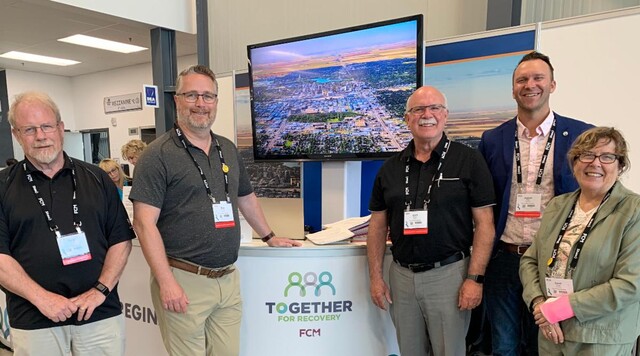 A large contingent of elected officials from West Kelowna took their plea for long-awaited funding for rising police costs and viable housing to the federal threshold.

The message was delivered by Mayor Gord Milsom and Councilors Doug Findlater, Carol Zanon, Rick de Jong and Jayson Zilkie at the Federation of Canadian Municipalities (FCM) conference, which concluded Sunday in Regina.

Mayor Milsom said in a press release Monday that the city must “unite” with other municipalities across the country and with the FCM to demand action from the federal government for funding to meet growing needs within the community.

“We may be a small community, but we need to be louder and we need to be heard by the federal government in conjunction with the FCM,” he said.

“In West Kelowna, we cannot sit back and have our voices heard by the federal government on affordable housing when the housing market clearly shows that the term ‘affordable housing’ is not accurate or realistic.

“And the federal government’s handing over of back wages to our 14-year-old young community for the RCMP to unite is simply unreasonable.”

With the conference now a personal affair for the first time since 2019, Milsom says the city can now advocate for community needs face-to-face, not virtually.

Milsom said the four-day conference also gave elected officials the opportunity to attend several workshops and exercises on indigenous peoples and learned valuable examples of Truth and Reconciliation from other cities across the country.

“Delegates had the opportunity to speak with leaders who have extremely positive examples promoting Truth and Reconciliation in communities similar to West Kelowna, where to us one side of the street is municipal and the other West Bank is First Nation,” Milsom said.

“We are excited to take home these successful partner examples and co-create our own strategies for West Kelowna and Westbank First Nation.”