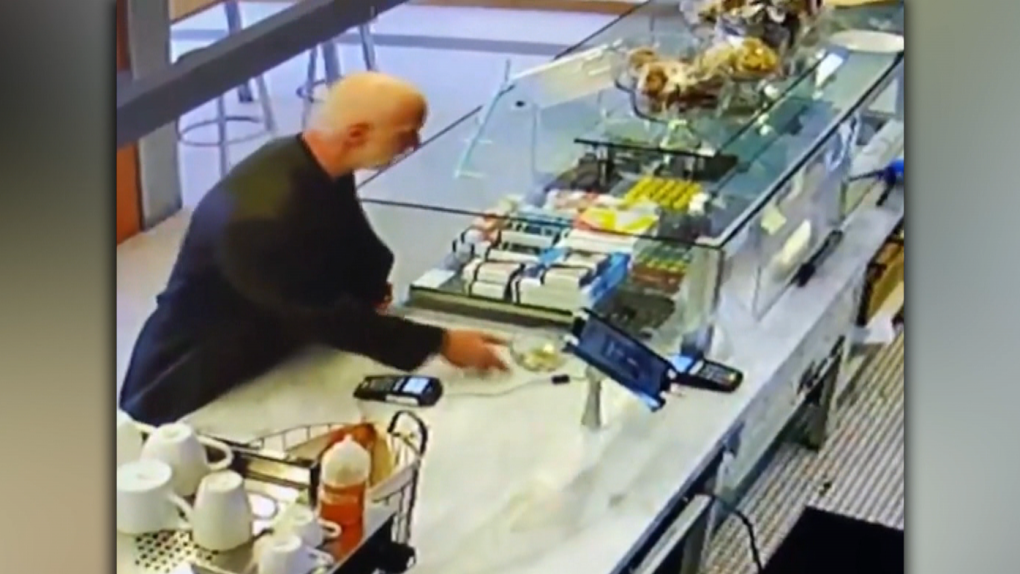 A West Vancouver chocolate shop owner is warning other businesses after a man was caught stealing a bowl of tips from the counter on surveillance video last Friday.

Steven Hodge, the co-owner of Temper Chocolate and Pastry, said the man ordered a sandwich and when the staff member left the counter to get it, he quickly tucked the bowl into his coat.

He then claimed that his credit card was not working and would go get another card from his car. The man never came back.

The staff only found out at the end of their shift that the tip tray was missing.

“So we went back to the cameras and watched, and were blown away,” Hodge said. “It kills me inside, it kills my staff inside because they work hard and depend on a lot of the tips here. I wish I’d caught him.”

Hodge decided to post a video of the tipping bowl theft on his store’s Instagram account, and comments came in from other companies that recognized the man.

One was the Bean Around the World coffee shop, just a few blocks from Temper Chocolate and Pastry.

“Instantly our group chat exploded, we were like, is this the same guy? Because we have a video of him. And everyone immediately said yes, absolutely, that’s the same guy,” says Bean Around the World barista Alanna Ward.

She said the theft happened a few months ago and was exactly the same as the one in the chocolate shop.

The man ordered a coffee and a croissant.

“He tried to pay, and when it didn’t go through, he said my wife would pay and left. And we said don’t worry and he never came back, and we looked and our tip jar was gone,” Ward said, adding the same man and then going to an adjacent business and stealing another tip jar.

“Nobody expected it, he looked like an average person, he seemed very nice and we trusted him and I think he took advantage of that,” Ward said.

Hodge reported the theft to the West Vancouver Police Department and decided to change the tipping arrangement at his counter.

After posting the video, he doubts the thief will return to his shop. But he wants to warn others.

“We are a community, we all support each other, especially in difficult times right now,” Hodge said. “Other companies should be aware in case he comes in.”