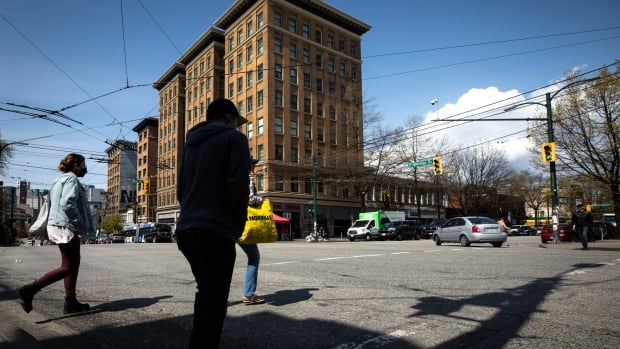 Myles Harps has lost several friends who were hit by vehicles on the Downtown Eastside (DTES). A friend was hit by a bus and lost his leg.

“I almost got here…and a guy pulled me back and it was just someone who didn’t see me,” Harps said.

The Vancouver neighborhood is home to some of the most dangerous intersections in BC for pedestrians, according to the latest data tracking vehicle-pedestrian collisions from ICBC.

At the top of the list is the intersection of East Hastings and Main Street. where between 2016 and 2020 there were 26 collisions between pedestrians and vehicles.

While there have been improvements over the past decade, residents and advocates say more needs to be done to prevent community members from dying.

Why is the DTES so dangerous for pedestrians?

The Downtown Eastside is a historic and vibrant residential and commercial district home to over 20,000 people.

It’s also a densely populated area that serves as a vital arterial road to downtown Vancouver, where the streets are shared by commuters and commercial drivers, as well as sometimes unpredictable pedestrians from a community battling high rates of mental illness and addictions. .

Aaron Bailey, program coordinator with the Vancouver Area Network of Drug Users (VANDU), says crowded sidewalks next to busy roads are a recipe for disaster.

Bailey says the city hasn’t provided staples like parks, gathering places, and even sidewalk benches, some of which he says have been removed from the DTES in recent years.

“That’s because gentrifying forces in the neighborhood don’t want DTES residents, especially people who use alcohol and drugs, to be in and use public spaces. And we think that’s fundamentally unfair.”

Without public spaces, the DTES community has nowhere else to go, he says.

Velocity along the main artery

More than a decade ago, speed limits were lowered to 30 km/h along part of the DTES, following a study being prepared for the city of Vancouver.

But both Harps and Bailey say they rarely see people driving at or under the limit.

He would like to see stronger enforcement, possibly with speed cameras at intersections.

It’s an idea supported by Sandy James, a city planner and the founder of Walk Metro Vancouver. She says speed cameras are an effective and proven tool for speed limit compliance, especially when drivers are stuck with a large enough ticket.

“So even just slowing down traffic and being a driver really aware that you are driving through a space that is being used by people is very important.”

Winston Chou, traffic and data management manager at the City of Vancouver, says speeds within the area have dropped thanks to the lowered limits, but not to the level they’d like to see.

He recently says the camera in East Hastings and Main Street has been upgraded to enforce the speed limit, but residents and lawyers would like to see more traffic cameras added at intersections in the area.

Vancouver police say the most recent collisions with pedestrians in the DTES were the result of pedestrian errors, such as jaywalking, rather than speed.

“Road safety is a shared responsibility. Everyone has a role to play, whether they are driving, walking, cycling or using any other mode of transport,” said Sgt. Steve Addison in a statement.

Harps admits he sees people crossing irregularly, but adds that it’s not just a matter of breaking the rules.

“Some of my Eastside siblings have mental disabilities and things like that. Some of them don’t look very well. Some people aren’t mentally there,” he said.

Harps says school zones have been created so that drivers are more aware of their unpredictable environment, arguing that drivers in the Downtown Eastside should take the same approach, and James agrees.

“In the 20th century, cars were king. But the reality is that the 21st century is a little bit different and people want to use the streets differently,” she said.

Bailey says the situation is much more nuanced than that of DTES residents who don’t jaywalk.

“People are very eager to shift the problems of the DTES onto the residents when the case is much more complex. The DTES and the dangers and harm people face here are the result of nearly 100 years of complex political and planning history,” he said. †

The city of Vancouver says it is constantly looking for ways to make the DTES more secure. In addition to lowering the speed limit, the city has made several improvements over the past decade, including installing intersections in the middle of the block, timing intersections, and more signage.