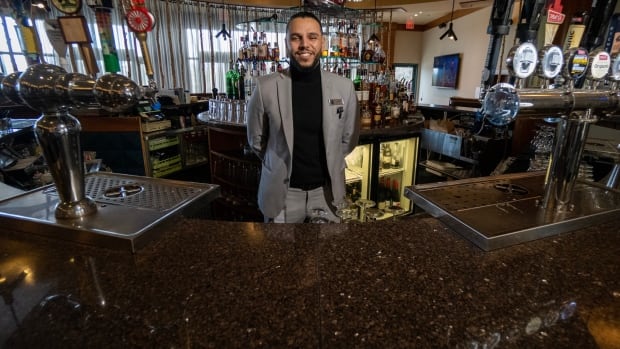 Two years of pandemic life have many thinking about what is really important to them. For some, that means rethinking their job choices, in what’s been called the ‘great layoff’. CBC Ottawa reached out to three young people to find out why they decided to take the plunge.

From student to government to hospitality, Issa Ibrahim says the pandemic has helped him make several careers

Despite the setbacks and frustrations, this 24-year-old says it was worth taking the plunge to do what he loves 1:41

Issa Ibrahim, 24: Changing the 9-5 for the hotel industry

In the spring of 2020, when Issa Ibrahim graduated from Algonquin College with a degree in hospitality and tourism management, he had already lined up his dream job: working at the Ritz Carlton hotel in Toronto.

But the pandemic coupled with the lockdown forced the hotel to delay and eventually withdraw their offer. It was not a good time to look for other options in his new field.

“I was very devastated. I didn’t know what I was going to do because the catering industry took a huge hit, there were no more jobs.”

Instead, Ibrahim found a job as an executive assistant in the public service.

He worked from home for seven months. While he was enjoying the job and doing well—even being offered a permanent job—society reopened, and his passion beckoned.

He decided to give up the nine-to-five lifestyle and take another shot at the hospitality industry, this time moving across the country to work as a front desk clerk at a hotel in Kelowna, BC, which also meant he had to leave his parental home for the first time. time.

“Everyone was shocked by my decision,” he said. “My family to this day says I have to go back to government.”

He says he got to discover different roles in the hotel, as well as in the surrounding mountains. A few months later, he decided to return to Ottawa, where he took on a role as the food and beverage leader at the Brookstreet Hotel.

“I learned a lot about myself during the pandemic. … To me it’s not worth it if you live a life full of regrets, or live a life that you are not going to enjoy.”

Working from home during the week and staying home on weekends was getting old for Nick Kathen.

The 24-year-old worked as a patient navigator and research assistant at the Bruyère Research Institute and shifted to work from home as the pandemic began.

That meant waking up, rolling out of bed, and walking just a few steps to get to his office for the day.

“Sitting at home all day wasn’t really something I enjoyed,” he said.

“I’m such an outgoing person. I like hanging out with people and being at home just didn’t work for me.”

In the early days of the pandemic, he struggled with whether to change anything.

“I was extremely afraid of leaving my job because it paid well. It was a research job for a hospital, I was on benefits, I had all these things.”

He says his work felt meaningful, including helping people in vulnerable and rural communities connect with resources to help them cope with the pandemic. His family was also hesitant about the change.

However, isolation made him lonely and he realized his heart was not in it anymore. He took what some would call a left turn.

On a whim, he applied for a vacancy at a downtown restaurant and now works there as a guest service manager.

“It really suits my personality…I’m also learning a lot about the business side of things,” Kathen said.

His advice? Find work that matches who you are as a person.

“Experience all you can,” he said. “If that means changing careers, do what you need to do to be really happy mentally and mentally well, then let the other stuff come.”

Hanna Zahirovic: From Service to Fulfilling a Life Purpose

When the pandemic hit, Hanna Zahirovic was working full-time in an escape room. For her, it created an opportunity to rethink what she wanted to do.

“It was not a good time to deal with people face-to-face… People felt the need to go out of their way to be rude and disrespectful, coughing and sneezing in front of you,” she said, explaining that she did not feel safe at work, especially in the early days of the pandemic.

She decided to quit and go back to school.

Zahirovic originally planned to combine work and a full-time study in computer science. But after two years, she realized she couldn’t do both and was forced to take a break from school to keep paying the bills.

“I did have to support myself financially, which meant paying rent and tuition fees,” explains Zahirovic. “Sometimes it’s like, what do you choose? Do you pay for a semester? Or do you pay rent?”

Through school, she was able to find part-time work in her field, and because classes were offered online and her remote job didn’t require a commute, she was able to combine both commitments.

“All of a sudden people have the opportunity, even if you work elsewhere, and you have classes, you can go home to study. That was the biggest difference for me.”

Zahirovic now works in a technical advisory role for Health Canada and she will graduate this summer with her computer science degree. She plans to work in this position full-time in the fall and is also buying her first home.

“I think people have this unfortunate habit of doubting themselves. It’s almost funny to look back and think I was worried because now I feel so much more confident in my job and my worth.”