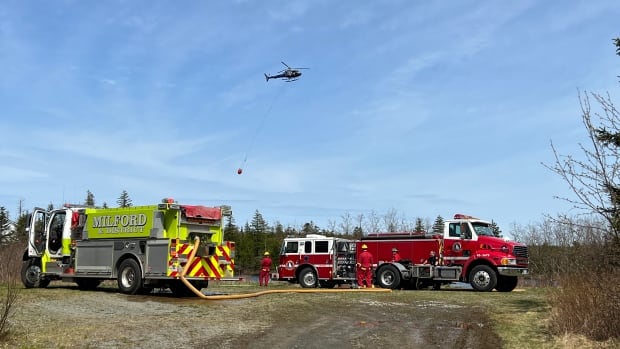 A wildfire near Upper Musquodoboit, NS, has grown from 20 to 52 acres since Friday but is not expected to spread beyond established limits given the current circumstances, said David Steeves, a spokesman for the Department of Natural Resources.

Because the terrain in the area is quite rough, it has become more difficult for firefighters to get around the perimeter, he said Saturday.

CHAPLIN: The fire is estimated to cover 52 hectares and will be about 70 percent under control as of 2 p.m., plus 15 @NS_DNRR< /a> personnel and equipment, @hfxfire tankers and Stewiacke Fire remain on site.

Steeves said there are about 15 department workers at the site in Chaplin, NS, with three Halifax Regional Fire and Emergency tankers and another from Stewiacke.

Meanwhile, a 3,200-acre fire near Horseshoe Lake in Yarmouth County is fully under control, Steeves said.

“That doesn’t necessarily mean they have a snake around it at all,” he said. “But the fire has moved to areas with unfavorable fuels or it has run into a road or areas with high rocks — something that hinders the movement of that fire.”

YARMOUTH: Wildfire at Horseshoe Lake is under control and 100% contained. No significant growth in size since last report. Two helicopters, 40 personnel and an incident management team remain on the scene today, but the water bomber CL-415 has been released from the scene.

Steeves said crews are scouring the area looking for bottlenecks in that fire.

The department said in a tweet that two helicopters, 40 personnel and an incident management team remain on the scene, but a water bomber has been released.