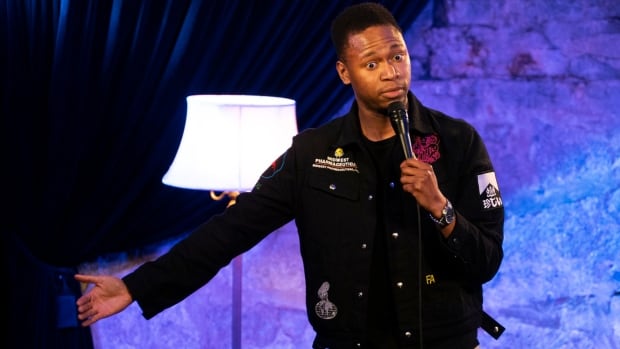 Making fun of your friends is great.

Laughing at your friends on a stage for pizza is even better.

That’s how Ola Dada, a 26-year-old comedian from Vancouver, says his comedy career started about five years ago.

He attended a comedy show at a pizzeria and convinced the booker to let him take the microphone and dunk on his friends for three minutes while they called him back.

It went well enough that he was invited to come back – and even get a piece of the house.

“It was like a feeling I’ve never really experienced before,” Dada said of that first time on the podium.

“I get a slice of pizza just to tell jokes? I’m like, I’m here every week! I’m lactose intolerant too.”

Now Dada has a shot at more than pizza: he’s in the semifinals of Canada’s Got Talent.

This week, he’ll see if he can impress judges and audiences enough to make it to the show’s finale for a $150,000 crack and a spot at a show in Las Vegas.

The magnitude of the opportunity has not escaped his notice.

‘An opportunity to learn’

Dada was born in Nigeria. His family moved to Fort McMurray when he was 10 years old. He came to Vancouver as a 20-year-old to get a degree in accounting.

His life experiences — his family life, growing up in a mostly white city, and even working as an accountant with a name that could make him mistaken for a Nigerian prince con artist, he says — have all influenced his comedy.

“I touch on black issues and things like that. I think it’s an opportunity to teach a little more in a light way.”

It took him a few years to tell his parents that he pursued comedy because they wanted him to follow a more stable path. As his career has progressed, he said, his parents have become his biggest supporters.

“What really struck me was when my mom said, listen, I’m so glad you stuck with this.”

Dada says he’s been the target of horrific racism during the performance, but he’s even been called the N-word by hecklers.

He says it’s become less common in recent years – COVID has put the breaks in live performances, for example, and he thinks the Black Lives Matter movement might make some people think twice – but he still can’t explain why people such language.

“I don’t like to say alcohol is involved because anyone who’s going to say something mean is probably going to say it anyway,” he said.

“I have to say something about it, because it’s the elephant in the room…my work begins. I find something funny about it. I make that person look stupid, and then we keep it moving.”

One of his career goals, he says, is to help create spaces for black comedians and comedians of color. One way is to host and organize Black Out Comedy, a recurring comedy revue that spotlights black comics.

His next appearance on Canada’s Got Talent will air Tuesday night. The vote of the public will then determine whether he advances to the final.