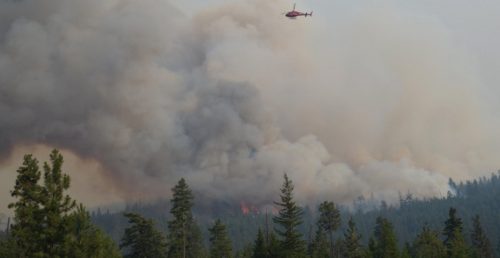 Kamloops RCMP says a woman has been arrested and charged on four counts of arson in a series of man-made wildfires in outback BC.

All of the fires started on Crown Land this spring and the BC Wildfire Service had to deploy its resources to put them out.

Angela Elis Cornish of Kamloops was arrested on May 11 and will be held in custody until her bail hearing on May 16.

Police say a tip from a resident near Monte Lake on April 30 aided their investigation. The person called police about a suspicious vehicle on a forest road while investigating smoke in the hills. The witness noted the license plate of the car.

Police warned the public about the suspicious vehicle on May 3, and other people reported their own encounters with the vehicle — driven by a woman.

The investigation was a joint effort of RCMP and the BC Wildfire Service. Anyone who witnesses a wildfire should report it by dialing *5555 from a cell phone.

News of the arrest came the same day federal officials informed Canadians of their plans to fight wildfires this summer at a news conference in Vancouver. The federal government will spend $516 million to train 1,000 additional firefighters and develop a new satellite wildfire monitoring system.