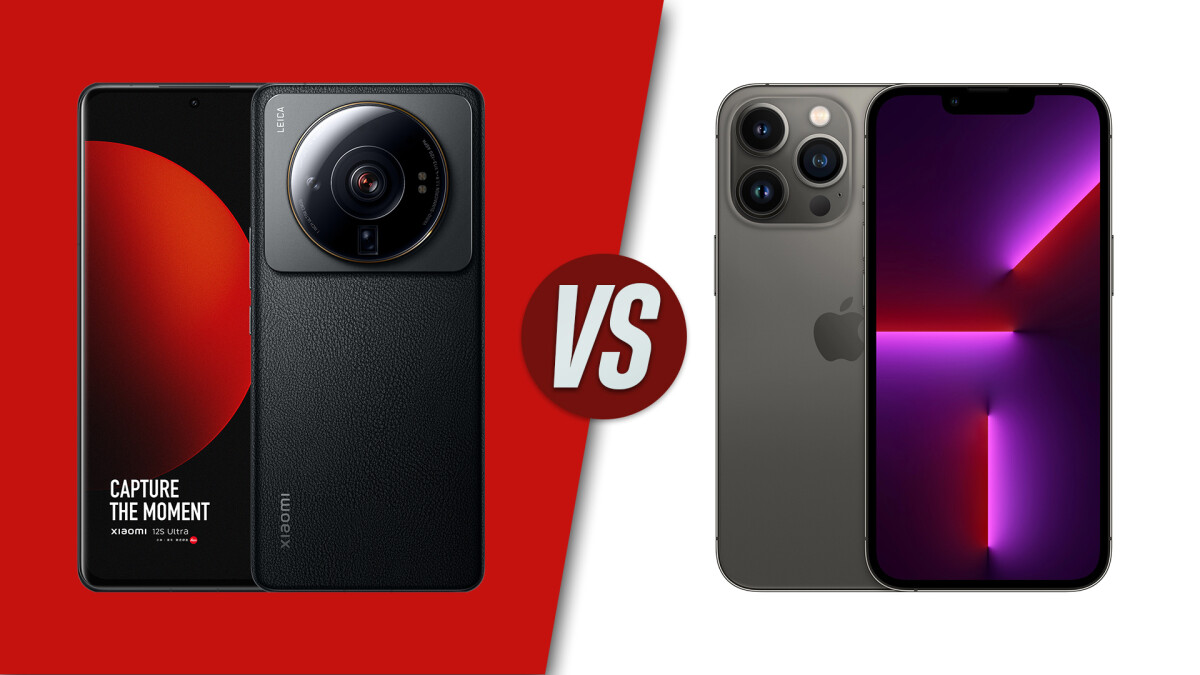 The new flagship Xiaomi 12S Ultra revolutionizes the camera space of smartphones with a 1 “sensor that we are used to seeing in prosumer cameras instead of phones. But can it really outperform the popular iPhone 13 Pro Max?

In this direct comparison, we look at camera quality, but also compare the two in terms of performance and overall speed. The Xiaomi 12S Ultra is equipped with the latest Snapdragon 8+ Gen 1 processor coupled with an innovative main dissipation system that may just rival the Apple A15 Bionic chip in the iPhone.

So what are the advantages of each of these phones and which one should you go for? And has Xiaomi finally made the “iPhone killer”? Let’s see.

Xiaomi 12S Ultra vs iPhone 13 Pro Max in a nutshell:

Party on the big screen

These two are both large and well-constructed premium phones and you can tell. The Xiaomi uses a leathery textured finish on the back that you rarely see these days, and this gives it a bit of a vintage camera feel and just gives it character. The iPhone, on the other hand, is your trusty glass and metal sandwich, with a glossy stainless steel used for the frame.

Both are clearly extra large phones at 6.7 inches, but the iPhone is also a bit heavier.

Both have an IP68 rating for dust and water resistance, a good thing to have for the occasion you drop your phone in water or stand in the rain.

The screen quality is top notch as well. We have 6.7-inch OLED panels with variable refresh rate (the Xiaomi ranges from 1Hz to 120Hz, while the iPhone goes from 10Hz to 120Hz). The two also get very bright, but it’s the Xiaomi that is a bit extra with 1,500 nits of peak brightness versus 1,200 nits on the iPhone, making the Xiaomi a bit easier to use outdoors on a sunny day.

Like most Android phones, the 12S Ultra uses an in-screen fingerprint scanner, while the iPhone 13 Pro Max relies on Face ID for biometrics.

The Ultra comes with the latest Qualcomm Snapdragon 8+ Gen1 processor and that chip is manufactured using 4nm technology. This compared to an Apple A15 Bionic processor, a chip that has remained the fastest in the industry, but is built on the less efficient 5nm technology.

Finally, Xiaomi talked a lot about the new heat dissipation system used in this phone, which uses a leaf-like network of tubes to allow hot air to escape from the phone more efficiently.

Expect a lot more details about the actual performance of this cool solution once we test the Xiaomi 12S Ultra soon.

On the software side, you have Android 12 with MIUI 13 on the Xiaomi versus iOS 15 on the iPhone. MIUI has borrowed some elements from iOS and will look very familiar to Apple users as well.

However, Apple has the upper hand with updates as iPhones typically get major OS updates between 5 and 6 years. No Android phones can compete with that.

A story about camera sensors

That gigantic camera system on the Xiaomi is no accident and is there thanks to a new 1 “sensor that powers the main camera. This size of a camera sensor is found on special cameras from prosumers, and bringing it to a smartphone comes down to a kind of a camera revolution.

Here’s how that compares to the iPhone:

Early examples show that Xiaomi has taken some wonderful color science from its newly formed partnership with Leica and has some high-quality filters in the camera app. The iPhone, for its part, has photographic styles that you can customize yourself.

We’ll dig deeper into photo and video quality once we get to test the phones soon, so stay tuned for that.

The iPhone 13 series set somewhat of a benchmark for smartphone audio with more bass than a typical phone, but the Xiaomi is also well equipped with its own dual stereo speaker system, and one refined by Harman Kardon, if we were to trust the marketing. .

Stay tuned for our real-world impressions of these two speakers coming soon.

Also, don’t forget that none of these phones have a 3.5mm headphone jack.

The iPhone has had the Taptic Engine for years, its powerful vibration engine that provides excellent haptic feedback (and will now be used when typing with iOS 16). We have yet to see if Xiaomi can match it with its own solution.

Can Xiaomi challenge the iPhone?

iPhones were never the biggest battery phones, in fact it was quite the opposite. Still, they get solid battery numbers. And the iPhone 13 Pro Max is very typical in that regard. It only has a 4,352 mAh battery, but it is the unofficial flagship battery champion of 2021 and 2022.

Of course, this is all because of the iOS battery and standby optimizations that really make a difference, and you can’t just expect any Android phone with a similarly sized battery to last the same. The Xiaomi, for its part, has a 4,860 mAh battery.

We’ll be updating you with real-world battery tests soon, so stay tuned.

However, when it comes to charging, Apple has been lagging behind for years. The iPhone 13 Pro Max unofficially supports the maximum charging speeds of 27W, which sounds skimpy compared to the 67W charging offered on the Xiaomi.

And the difference is perhaps even greater for wireless charging: an iPhone takes more than 3 hours, while the Xiaomi charges in just north of 50 minutes (with a compatible charger).

The Xiaomi also has reverse wireless charging that you can use to top up smaller gadgets like watches or headphones, a feature missing from the iPhone.

The Xiaomi seems to have a bit of a technical advantage, don’t you think?

So in the end it comes down to your preference: the Xiaomi with its impressive new camera system and open Android platform looks like a great tool for the avid photographer, while the iPhone with its familiar iOS and ecosystem integrations with iMessage, Apple Watch, AirPods and other gadgets may appeal to you for its ease of use.

Which one would you go for?