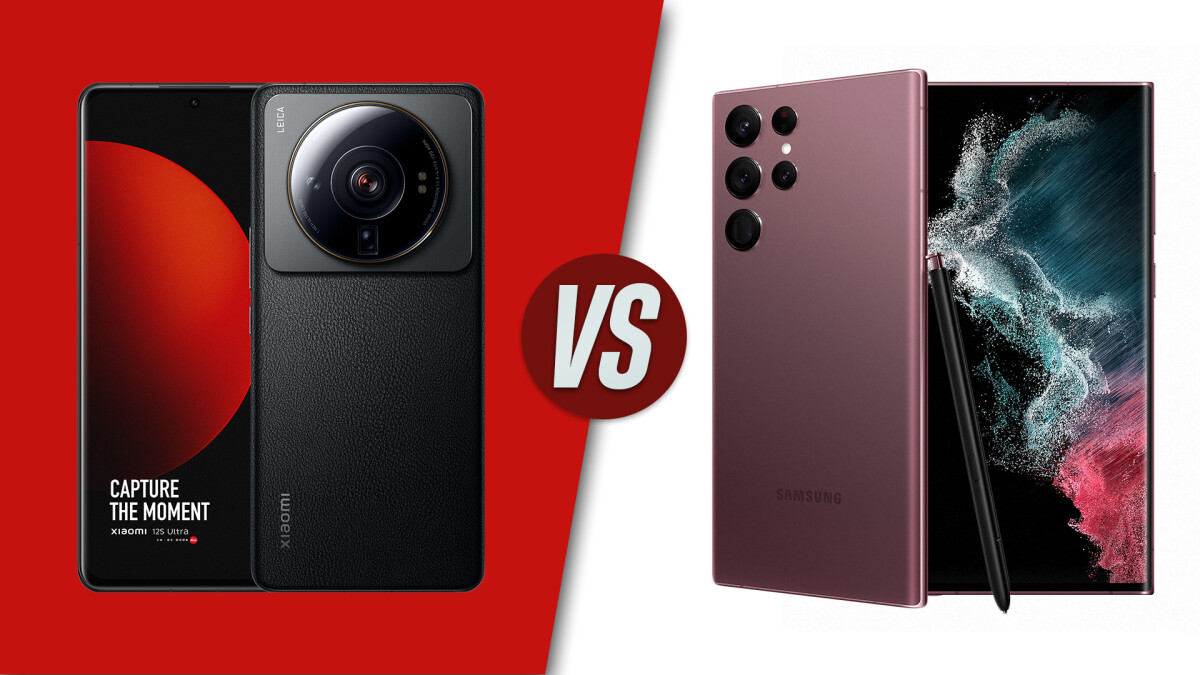 The Xiaomi 12S Ultra comes with a massive camera system and has the ambition to beat all other phones in the camera game, so what better phone can you compare it to than the Galaxy S22 Ultra, Samsung’s very best camera phone out there?

Both are big phones with cameras that can shoot well at night, as well as zoom in, but the Xiaomi has a larger sensor that gives it an advantage in low light, plus it has a single 5X zoom camera versus the dual zoom camera system on it. galaxy.

In this comparison, we will not only compare camera quality, but also performance, battery life, charging speeds and all the other interesting details to help you determine which of these two extraordinary smartphones is better for you.
Xiaomi 12S Ultra vs Samsung Galaxy S22 Ultra in a nutshell:

These two are big phones with big screens, but they are also slightly different. The Galaxy is a bit wider, while the Xiaomi is narrower and easier to grip.

Both have slightly curved screens, a 6.7″ on the Xiaomi and a 6.8″ on the Galaxy. There are no compromises: 1440p resolution on both for perfect clarity, an adaptive refresh rate of 1-120Hz thanks to LTPO technology and all that jazz.

A small advantage of the Galaxy over the Xiaomi is the peak brightness which can reach a whopping 1,750 nits against 1,500 nits on Xiaomi.

Both don’t have a headphone jack, but are well protected from the elements with an IP68 rating for dust and water resistance.

The pair also uses in-screen fingerprint scanners, an ultrasonic one on the Galaxy and an optical type on the Xiaomi. We will soon test and compare this.

One thing the Galaxy does have and the Xiaomi doesn’t is an S Pen. Having this built-in stylus can come in very handy if you’re an artist or architect, or just like to tinker with handwriting and drawing things on your device.

Being newer, Xiaomi 12S Ultra gets a “plus” for performance

The Xiaomi 12S Ultra will launch later in the year and will benefit from using the latest and most powerful Qualcomm Snapdragon 8+ Gen 1 chip, while the Galaxy S22 Ultra runs on the slightly less capable regular (non-plus) version of the same chip. . Worse, Galaxy users outside the United States get a completely different processor, the Samsung Exynos 2200, which has even slower speeds and also affects camera performance.

Xiaomi officially claims that the plus version of the chip is 21% smaller, with both the CPU and GPU getting a 10% speed improvement and a 30% higher power efficiency, so the 12S Ultra consumes significantly less power in standby. . We should test that, but it sounds promising.

The rest of the components on both Ultras are similar: LPDDR5 fast RAM and UFS 3.1 type storage.

One area where Samsung has really impressed us lately is its software update policy that ensures its phones remain relevant for years to come. Here’s how these two companies compare in that regard:

A revolutionary new sensor makes the difference for Xiaomi

Smartphone cameras are inherently size-limited, so they simply can’t use a large camera sensor that usually equates to higher image quality.

The Xiaomi 12S Ultra changes that as it is the first smartphone to be equipped with the Sony IMX989 1-inch camera sensor, a revolutionary sensor that for the first time is similar in size to sensors on high-performance compact cameras.

Both phones have a dual speaker setup with a main speaker on the bottom and a secondary speaker embedded in the earpiece. That will give you a stereo sound effect and louder sound. We have yet to test the two side by side and will update this section with impressions soon.

The same goes for the quality of the vibration motor on both. Expect flagship-level haptics, but we can’t give you more details until these two go through our testing procedures shortly.

Xiaomi explains that with such a large camera sensor, space for battery was limited and therefore went with a slightly lower battery capacity, but to be fair, the difference of 140mAh is only 3% less than the Galaxy.

What Xiaomi is different in is the use of a new power controller chip that ensures that the battery does not overheat and lasts longer.

Charging speeds are also significantly faster on the 12S Ultra at 67W versus a maximum of 45W on the Galaxy.

Both phones also support wireless charging with again quite a difference in speed: 50W on the Xiaomi vs just 15W on the Galaxy.

The Xiaomi 12S Ultra challenges the Galaxy S22 Ultra for the best phone camera title, but will it succeed?

It’s too early to say, but it definitely has the upper hand when it comes to the tech with more capable camera sensors being used, plus it beats the Galaxy in terms of speed and charging speeds. The Galaxy has the advantage of a built-in S Pen, as well as that long-range 10X periscope zoom, but it’s a close call between the two.

Which one would you go for?