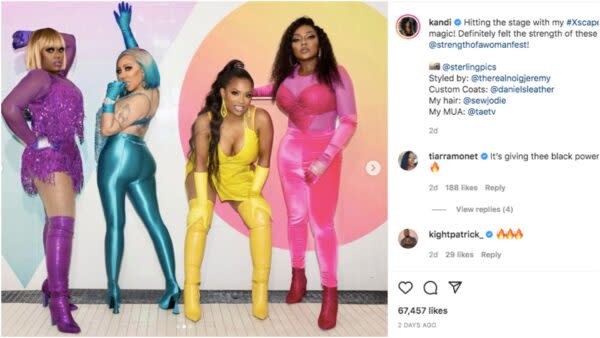 Things took a turn for the worse when the reality star of “The Real Housewives of Atlanta” Kandi Burruss shared photos of herself posing with her music group Xscape, while fans drew comparisons to former teen pop group OMG Girlz. Some of the members of the group included Zonnique Pullins, the daughter of Xscape member Tameka “Tiny” Harris; Queen Carter and Bahja Rodriguez.

The “RHOA” veteran posed with Harris and other Xscape members LaTocha Scott and Tamika Scott for several photos shared on Instagram. The ladies were styled by celebrity stylist Jeremy Haynes in colorful ensembles.

The message read: “Getting onstage with my #Xscape sisters is always magical! Definitely felt the power of this @strengthofawomanfest! @sterlingpics Styled by: @therealnoigjeremy Custom Jackets: @danielsleather My Hair: @sewjodie My MUA: @taetv. ”

Several celebrities responded to the post on Instagram, including actress Naturi Naughton, who wrote: “Y’all KILLED It!!! I sang every word!”

Rapper and entrepreneur Da Brat replied: “MAGIC!!! From jumping! Since the 90’s!! BUT STILL!! #longevity.” Singer Mary J. Blige posted several fire emojis under the post. Fans also chimed in. “You all look amazing,” wrote one fan. “They snapped on these outfits,” wrote another.

Other fans were not so impressed with the ladies and their bright ensembles. After The Neighborhood Talk asked Instagram users for their opinion, several fans joked. The message was captioned: “The ladies of Xscape are coming through with some colors! Neighbors, what’s in it?”

“Exactly wtf did I say before reading the caption,” one replied. “They look like power rangers lol,” added another. “It gives me teletube authenticity,” said another.